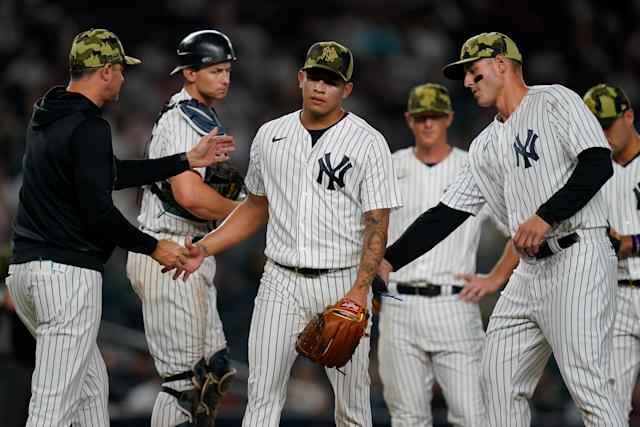 The New York Yankees have found themselves in a mess since the All-Star break after a magnificent start to the year. The team has struggled in the pitching and offensive department, losing 11 of the last 13 games. Moreover, Monday’s 4-0 loss against the Tampa Rays exposed another weakness for the Yankees in the center field. Aaron Hicks was given the centerfield position to relive Aaron Judge, who has not played in the position since the end of July. However, Judge was forced to return to his old position on Tuesday after an embarrassing outing for Hicks on Monday.

The 32-year-old is having a terrible season after missing out on most of the last season due to wrist surgery. However, the Yankees centerfielder reached a new low on Monday after conceding a run due to a defensive blunder at the center before going 0-for-3 while batting, leaving five men on base. Aaron Hicks has dropped to 5-for-53 in his last 16 games and will likely be replaced by Estevan Florial soon. After an extremely embarrassing performance from Hicks, he was dropped from the lineup on Tuesday.

Talking about the issue, Yankees manager Aaron Boone sensed disappointment and sadness from Hicks on Monday. Boone suggested that the Pinstripers uniform was heavy for him in the current situation. The possible fix for the Yankees right now is bringing in Estevan Florial in place of Hicks. However, the team did not make a call on Monday and was expected to decide on Wednesday. Boone revealed that the Bombers’ had not made a certain decision yet after losing 3-1 to the Rays on Tuesday. Aaron added, “We’ll talk through some things. There could be some things we decided to do, but nothing’s final yet.”

Florial is currently playing for the Triple-A Scranton/Wilkes-Barre in St. Paul, Minnesota. The 24-year-old went 332-for-4 on Tuesday with a double, a walk, and two RBIs. In 88 Minor League games this season, Estevan has averaged .284 with 14 homers, 32 stolen bases, and an OPS of .852. Moreover, the Yankees outfielder was struck out 122 times in 349 at-bats. However, it would be interesting to see if the Yankees bring Florial in place for a struggling Hicks.

The Yankees have missed their standout relieves, Michael King, desperately. The Yankees pitcher was sidelined after suffering a right elbow fracture while throwing a pitch in late July. The 27-year-old underwent surgery and is feeling great while recovering from the injury. However, the Yankees pitcher hoped that he would not require a second surgery, which would ultimately rule him out for the season. Speaking before Monday’s game, King revealed that the MRIs suggested his ligament was intact and quite healthy. Before getting sidelined, Michael had an ERA of 2.29 in 51 innings.

King stated that he knew the bullpen needed help. So, he decided to throw through the soreness he was feeling at that time. He had done it so many times playing through an issue for a week or two before the problem went away. However, unfortunately, on this occasion, Michael ended up fracturing his elbow. In the next three or six weeks, his next MRI will suggest if the Yankees’ reliever needs Tommy John Surgery. If that happens, King will not be able to return back to the field this season.