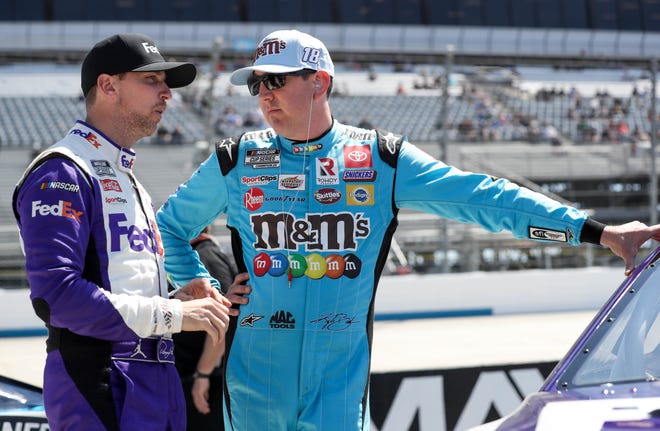 On Sunday, Danny Hamlin and Kyle Busch showcased a magnificent performance during the NASCAR Cup Series race in Pocono. The two Joe Gibbs Drivers finished first and second during the race. However, hours later, their top positions were stripped away following the post-race inspection when the stewards found tapes applied at the front of their cars. The Joe Gibbs drivers were disqualified from the race, and Chase Elliot, who finished third in the race, was named the new winner.

Hamlin’s disqualification is the first time a Cup Series race winner has been disqualified due to a post-race inspection failure. NASCAR introduced the disqualification policy before the 2019 season. Earlier, the racing body gave away point penalties and crew suspensions for winners’ cars failing the inspection. However, under the new policy, Danny Hamlin and Kyle Busch faced a critical disqualification, taking away Hamlin’s third win of the season. Meanwhile, Chase Elliot secured his fourth win this season. This would strengthen his position on top of the rankings, with only five races to go in the regular season.

NASCAR disqualified the two drivers as adding things like tape at the car’s front could affect the aerodynamics significantly. Despite the tape is under the wrap, including the paint scheme and sponsor logos. NASCAR introduced a standard 2022 car this season, restricting teams from finding some extra speed. The teams get a spec car, and they can buy parts and components from approved single-source vendors, supervised by the racing body. Meanwhile, Joe Gibbs Racing accepted their mistake and apologized to the fans.

Joe Gibbs Racing Will Not Appeal The Disqualifications

The JGR competition director Wally Brown issued a statement explaining why the tapes were on the car. He also apologized for the mistake. Wally stated Hamlin and Busch’s cars’ inspection at Pocono spotted a single piece of clear tape placed at the lower corner of the front fascia at the left and right front wheel openings. The piece of tape was 5.5 inches long and 2 inches wide, with a 0.012inches thickness. The statement claimed that the change in their build process was not properly supervised within the team. They realized it was against NASCAR’s rules. Brown added, “We apologize to everyone for this mistake, and we have changed our process to ensure that it does not happen again.”