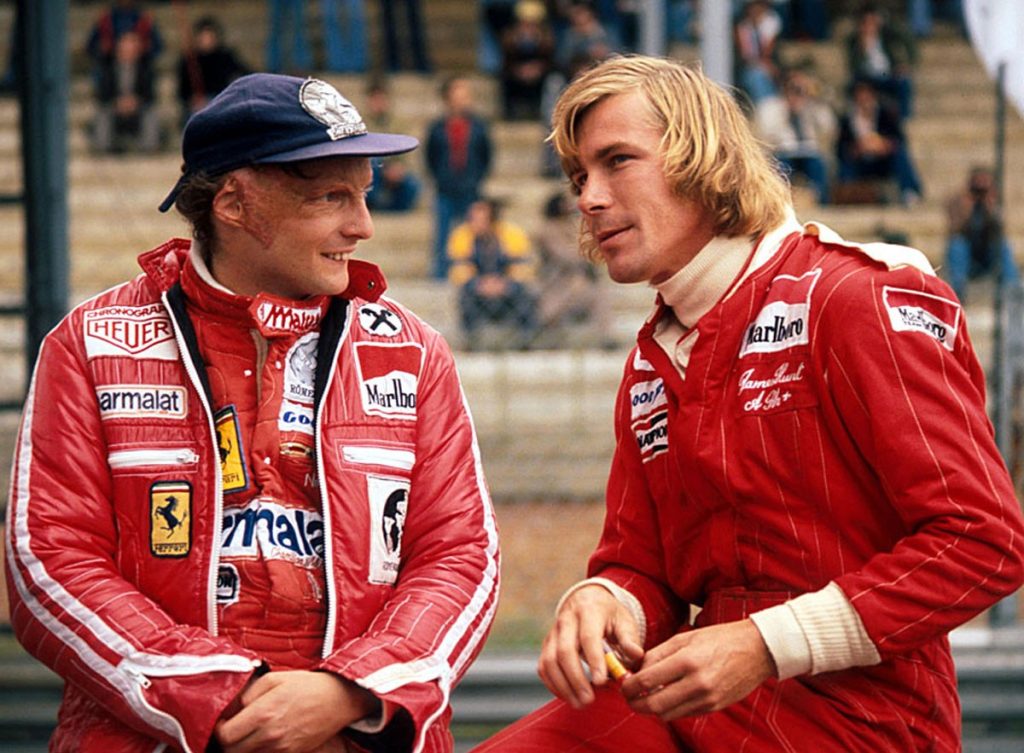 James Hunt was one of the most iconic F1 drivers between the 1970s and 80s. The British driver won the 1976 F1 Championship for McLaren in his rookie year with the team. Hunt was known for his risky and aggressive racing, which often ended in either crashing or winning. Hence, he was nicknamed by his admirers as “Hunt the Shunt.

James began his F1 racing career when he drove a March 731 registered by the Hesketh Racing team. The legendary Briton, who was known for his action-packed racing, won World championship and non-championship races in Hesketh 308 car. Eventually, Hunt joined McLaren in 1975 and won the world championship during his first year with the team in 1976. However, James did not have much success after winning the championship and retired in 1979.

Moreover, the Briton established a motor-racing commentatory career at BBC. Other than being totally crazy on the racing track, James Hunt is also known for his charms that have led to the rumors that he bedded at least 5000 women during the 1976 championship-winning season. In addition, the British driver was also associated with drug usage, which was not so uncommon during the 70s.

James Hunt’s son Freddie, also a racing driver, revealed the truth behind the rumors that still actively move around in the F1 fraternity. Freddie Hunt downplayed his father’s drug usage. But he was open about his father’s ability to charm women into having his way. James’ 5000 figure includes 45 British Airways air hostesses during the championship title season in 1976. Unfortunately, the iconic F1 legend died in 1993 at the age of 45. But his memory still lives, with a lot of people remembering him for his ruthless racing and playboy personality.

James’ Hunt Son Opens Up About The Rumors Around His Father

Freddie Hunt is a Michelin Le Mans Cup LMP3 racing driver for Passionate Racing. Talking to The Times, that he can vouch for the number of women that his dad slept with. But, Freddie clarified that James was not a junky, but the former admitted that his dad used coke occasionally. Moreover, the 24-year-old said that he is quite similar to his dad, but his mother, Sarah Lomax, was pretty naughty too.

The other major rumor around James Hunt is that he slept with 35 air hostesses in the build-up to the Japanese Grand Prix in 1976. Freddie, who was born 11 years later, stated that the air hostesses would come to the hotel, take a stop, and get back to the plane the next day. He added, “There was a different one every night.”

Before winning the F1 championship in 1976, James Hunt was married to an actor, model, and dancer Suzy Miller. However, the Briton’s first marriage ended after Suzy left him for Richard Burton. Hunt remained an eligible bachelor until 1983 before he married his second wife, Sarah Lomax. The couple had two kids, Tom and Freddie. Unfortunately, his second marriage broke down too. Finally, James met an 18year-younger woman names, Helen Dyson. Hunt proposed to Helen in 1993, just a day before he tragically died of a heart attack. The legendary and charming Briton story was showcased on the big screen in the 2013 movie Rush, starring Chris Hemsworth as Hunt.

Share. Facebook Twitter Pinterest LinkedIn Tumblr Email
Previous ArticleVerstappen Will Look To Finish Some Unfinished Business At Azerbaijan GP After A Frustrating Retirement In 2021!
Next Article LeBron James Shares His Desire To Play For Golden State Warriors In New The Shop Trailer!