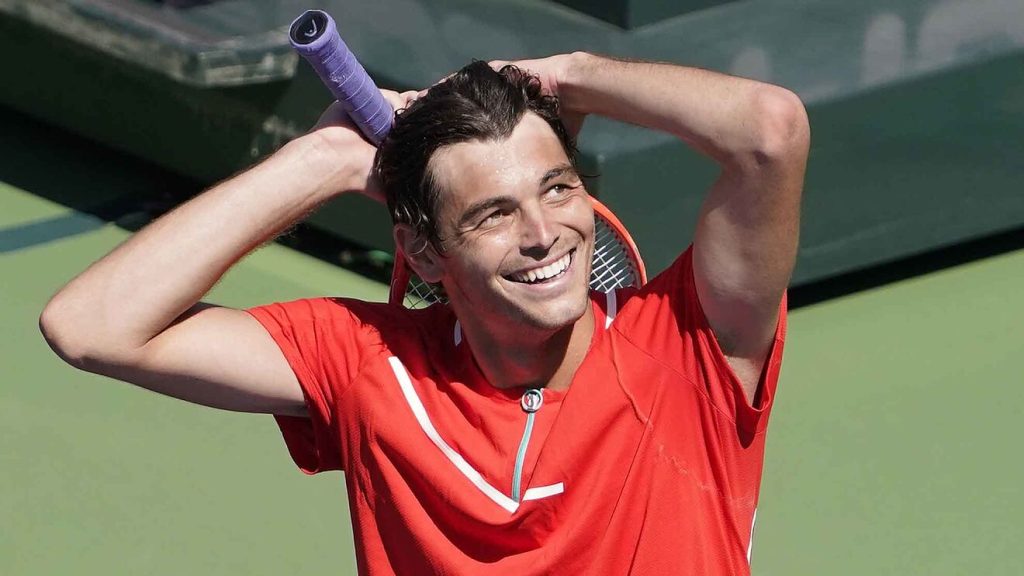 Taylor Harry Fritz is a professional American tennis star born on October 28, 1997. The athlete is famous for winning three ATP tour singles. Being a famous player, fans know about his career achievements. However, there’s quite much curiosity about his personal life and girlfriend among the fans. So, let’s discuss Taylor Fritz’s girlfriend and his life.

Taylor Fritz advanced to the quarterfinals of every junior Grand Slam competition in 2015. He competed in the French Open final, but Tommy Paul, a fellow countryman, defeated him. However, that same year, he defeated Tommy in the US Open final. With Donald Young and Andy Roddick no longer holding the ITF Junior World Title, he became the lone American to do so. Fritz has a 139-127 career win-loss record.

Moreover, the American tennis player has one career victory he attained in 2019 at Eastbourne. Fritz won his first ATP title on the tour after defeating fellow American Sam Querrey in the championship match. He has been playing consistently on the circuit ever since. As a result, he has climbed to number 20 in the ATP rankings. In fact, he rose to his highest position of 16 in February 2022. In 2020, Taylor defeated John Isner in the semifinals to advance to his first ATP 500 final in Acapulco. Unfortunately, Rafael Nadal prevailed over him in the championship match.

He made it to the second week of a Grand Slam event for the first time in his career in the 2022 Australian Open. But after a tough struggle, Fritz was defeated by Stefanos Tsitsipas in the fourth round. The match against Alexander Zverev in the quarterfinals of the Indian Wells in 2021 may have been his best career victory. In the encounter, the American saved two match points to defeat the world number four and go to his first Masters 1000 semifinal.

Who Is Taylor Fritz’s Girlfriend?

Talking about Taylor Fritz’s dating life, the tennis star is currently dating model Morgan Riddle. She is a well-known Instagram model and Tiktok influencer. Riddle, who has ties to Poland, was born on July 31, 1997. She is presently working at Gamers Outreach as the media director. It is a nonprofit organization that collaborates with several hospitals in different parts of the United States of America to provide video games for the amusement of sick kids.

Riddle held a position as an on-air host at Hollywire, one of the top media organizations in America that specialize in celebrity news. Prior to dating Taylor Fritz, Morgan Riddle acknowledged that she knew very nothing about tennis, but she has since fallen head over heels for the game. Moreover, Prior to Riddle, Fritz was dating tennis player Raquel Pedraza, with whom he even got married in 2016 while Fritz was only 18 years old. But in December 2019, after three years of marriage, the pair decided to call it quits.