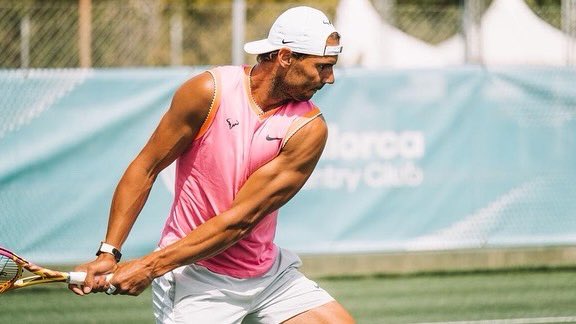 Rafael Nadal came quite close to winning his third major title of the year. The Spaniard progressed dominantly into the semifinals. However, Rafa suffered from an abdominal tear, restricting him from pulling off a perfect serve. Hence, the 36-year-old withdrew from the semifinals, ending all hopes of winning four majors in a season.

However, amid the disappointment, the 22-time time Grand Slam winner achieved a big milestone during the fourth round of Wimbledon. Rafael played his 350th Majors game against Biotic Van De Zandschulp to secure his 310th victory at Grand Slams. The Spaniard joined his Big Three rivals Roger Federer and Novak Djokovic, who have already reached the milestone of playing 350 matches.

Nadal first played a major tournament at Wimbledon in 2003. The then-17-year-old teenager surprised everyone by making it to the third round. His first Majors title victory came in 2005 when he clinched his maiden Roland Garros in Paris. The Spaniard did not stop his rise to domination as he secured his first Wimbledon trophy in 2008, followed by the Australian Open win six months later.

Rafa then reached his career Grand Slam at the US Open in 2010 at the age of 24. He became the youngest player to achieve the feat in the Open era. Although the journey has been really testing for Nadal, with injuries always around the corner. But he has managed to bag 22-Grand Slam titles, which is the highest in Men’s tennis singles.

This time, Nadal came back from his chronic foot injury treatment and recovery to compete at Wimbledon after three years. The 36-year-old aimed to win his third title of the year. But all his hopes ended when he suffered an abdominal injury, ending his run at the All England Club.

Rafa came to Wimbledon 2022 with 346 Major appearances under his name. The Spaniard had a tough start on the grass court as he fought hard against Francisco Cerundolo and Ricardas Berankis. He took almost six and a half hours to beat the players in the first two rounds and dropped a set in each game.

However, Rafa came back stronger and showed some fierce tennis against Lorenzo Sonego and Botic Van De Zandschulp to enter the semifinals after straight-set wins. His win against Zandschulp was his 350th win, after which he had to retire from the tournament. Meanwhile, Federer has the most (429) Majors appearances, followed by Djokovic with 381. Rafa is in third place with 350 matches, Jimmy Connors in fourth(282), and Andre Agassi in fifth(277).