Mercedes To Bring A New Nose Design For Their W13 At The French Grand Prix! Is There Any Chance Of Win? 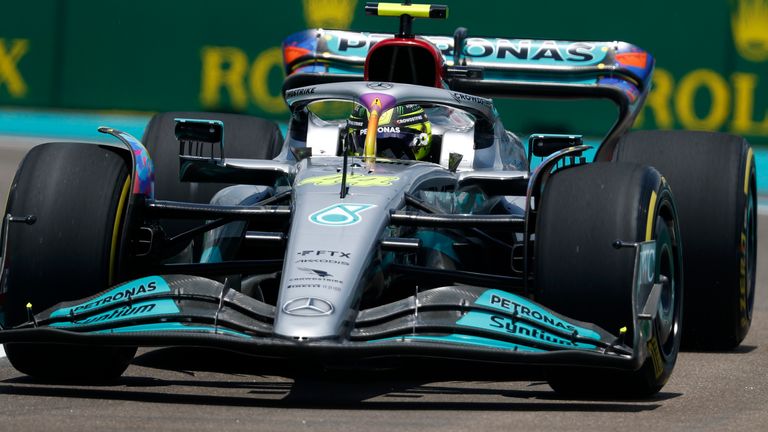 After an unexpectedly troubling start to the season, Mercedes finally had a real shot at winning their first race of 2022 at the French Grand Prix. The Silver Arrows’ dominance was hindered by the W13’s uncontrollable porpoising. This restricted them from competing at the front with Red Bull and Ferrari. However, Mercedes finally seem to have gotten rid of its issues and are slowly coming into the groove, inching closer to the front.

The German outfit clinched four podiums in the last four GPs. And they would hope to continue the momentum at Paul Ricard. Moreover, the faster and much smoother track in France could be a real opportunity for Mercedes to get their first win in 2022. Therefore, the Silver Arrows would be bringing some upgrades during the French weekend in an attempt to taste victory. As their porpoising troubles are behind them, Mercedes could finally focus on bringing improvements to boost their performance and close the gap to the frontrunners.

Mercedes seemed to be quite fast in Barcelona. Lewis Hamilton went on to finish fifth after falling at the back of the grid due to an opening-lap puncture. Going ahead, Mercedes had some tough races in Monaco, Baku, and Canada. However, things finally started to come through in Silverstone when their upgrades allowed them to counter porpoising and find some much-needed pace to compete with the two Ferraris for a race win. Eventually, the Briton finished third due to a late safety car procedure at his home, securing his second podium of the year. But with new upgrades in France, Mercedes have made it clear that they are ready to move to the next level and get a little closer to the front.

Mercedes Bringing A New Nose Design At The French GP

Mercedes boss Toto Wolff said that the recent podiums were a testament to his team heading in the right direction. However, the former Austrian driver insisted that more efforts were required to push Red Bull and Ferrari. The Silver Arrows won just three podiums in the first seven races. And now, they have bagged four podiums in the last four races. The team Principal was pleased by the building momentum. He reckoned that the recent performance improvement reflects the huge efforts the team had put into improving the W13.

Toto revealed that the W13 was improving with each lap. It was encouraging for Toto and his team to see their efforts being reflected in their development and results. Moreover, the Mercedes boss reckoned that his team needed to find the final few tenths. He also informed that Mercedes would bring upgrades to the car, including the French weekend. While all the details of Mercedes’ development this weekend will be revealed on Friday, the Brackley-based outfit will introduce a brand new nose design.

The Silver Arrows have been working on finding some more straight-line pace in their W13. Thus, the new nose design features a different profile compared to the previous version, which was much flatter. The new nose tip looks more refined as it merges with the rest of the structure. It would help the Silver Arrows reduce the drag in their W13, allowing more downforce and pace. Meanwhile, the design also has driver cooling holes at the front tip. With the temperatures expected to be quite high in Paul Ricard, the cooling holes seems a smart choice. Thus, it could turn out to be a perfect opportunity for Mercedes to get their first win.