Mercedes’ George Russell Claims He Left His W13 “To See If He Could Have Helped Zhou” After Opening Lap Crash At British Grand Prix! 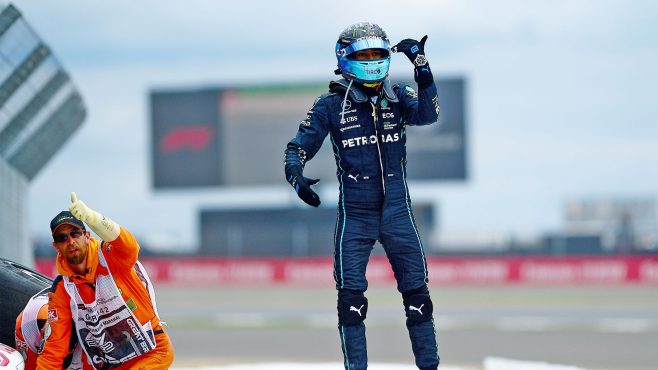 The British Grand Prix 2022 was undoubtedly the most dramatic race of the season. The opening lap of the Sunday saw one of the most horrific racing accidents as Alfa Romeo’s Zhou Gyanyu’s car flipped over the barriers. The Chinese driver crashed into the fencing of the Sir Lewis Hamilton grandstand after making contact with Mercedes George Russell.

The British driver recently described the whole incident and explained that he quickly got out of his W13 to help Zhou. However, following the incident, the Mercedes driver failed to start his car. Thus, he was not allowed to continue racing after receiving outside help from the marshals who carried his car to the pits.

George Russell qualified eighth on the grid for Sunday’s race and was the only driver to start the race on hard compound tyres. Mercedes took the gamble in order to secure a podium. However, the British driver felt that the decision might have cost him his performance at the start. This resulted in him getting stuck among other cars. George also stated that the lack of temperature in his hard tyres also played a part in the crash with Zhou and AlphaTauri’s Pierre Gasly.

Russell revealed that Mercedes took a gamble on the hards as he did not pull off a better position on the grid during qualifying. Thus, Russell started out of position, and the Silver Arrows felt like it was their best opportunity to fight for a podium in Silverstone. However, the 24-year-old pointed out that Mercedes knew it would be tough during the first lap. And it turned out to be extremely difficult.

George Russell further mentioned that he could not get any temperature in his tyres. Then he received a contact from behind and went into the side of Zhou. And this resulted in the Chinese driver’s car flipping off. Zhou lost control of his car as it went sliding upside down towards the barrier.

The car hit the barriers and flipped towards the fencing. Russell quickly got over the fence and signaled the marshals to rush in after the race was red-flagged. While other drivers gathered in the pit lane, George ran to help the Chinese driver in need of extraction from his car. After the incident, George Russell opened up about his reaction. But this resulted in the Briton not being allowed to continue racing even though his car did not receive much damage.

Russell Frustrated With Not Being Allowed To Continue Racing

Russell stated he knew it was safe to jump out of his W13 as the race was red-flagged. He said he wanted to find out if Zhou was okay and if he could have helped in any way. However, when the Briton returned to his W13 to get back to the pit, he could not start it.

Further, George ran back to the pit to check with the team. However, when he came back, the marshals had already loaded his car on the truck even though he requested them not to. Russell added that his car just had a puncture. Thus it was frustrating for him as his W13 had the pace to at least finish P6. George Russell concluded, “So many emotions but glad to see that Zhou is doing okay. It’s horrible to see an incident like that.”

Russell requested the FIA and race director to allow him to race during the restart. However, the governing body ruled against his request as he received outside assistance from the drivers. Thus, while Mercedes faced their first DNF of the season, Lewis Hamilton finished P3 in Silverstone on Sunday.

Meanwhile, IndyCar driver Callum Ilott commended George Russell’s brave decision. The British IndyCar driver mentioned that the first time he flipped a go cart, Russell stopped on the track and lifted the cart off him. Ilott added, “He’s always been a good egg since day 1, a great role model for anyone.”