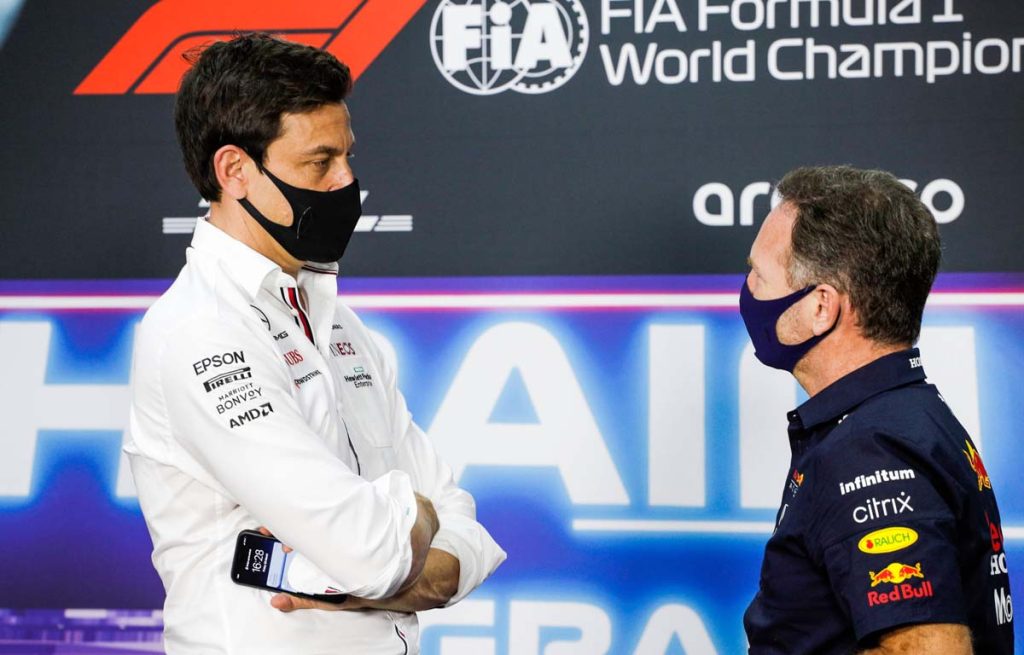 Mercedes and Red Bull were involved in one of the toughest F1 championships in the history of the sport. Lewis Hamilton and Max Verstappen went against each other wheel-to-wheel on several occasions, and the fight often ended on a sour note. After dominating the F1 circuit for eight straight years, Mercedes had to swallow a tough pill last year as Max beat Hamilton in the final Abu Dhabi GP to deny the Briton his eighth world title. Meanwhile, the two team principals, Toto Wolff and Christian Horner, were also battling to get their team an advantage and often ended up having tough encounters.

Verstappen and Lewis took each other out of the race a couple of times in Silverstone and Monza. These incidences made the battle more intense with such a close championship fight. Recently, Mercedes’ Toto Wolff talked about the intensity of last year’s rivalry and how he was not proud of smashing his headphones during the Saudi Arabian GP. Lewis Hamilton and Max Verstappen again had a close race in Saudi Arabia last year and got caught in another heated incident. Max went ahead of Lewis Hamilton and was asked by his team to give the position back to Hamilton strategically.

The Red bull driver smartly allowed Lewis Hamilton to come close to him and then brake-tested Lewis, resulting in an impact that damaged the Briton’s front ring. It was clear that Verstappen did it on purpose, and the penalty would have been for the deliberate attempt to sabotage a rival car. The Mercedes boss was clearly unimpressed by the trick his rival Christian Horner and Red Bull pulled off.

As a result, Wolff lost his cool and literally smashed the life out of his Bose headphones in anger. The video became quite viral on social media platforms after the incident happened. Wolff revealed that he was not proud of smashing the headphones. The former Austrian driver insisted that there was still an aggressive kid in him who had a tough upbringing, which eventually came out during the incident. He added, “That’s how I am. I literally had to fight for feeling adequate.”

Christian Horner Claims He Got To Toto Wolff

The on-field battle between Lewis and Verstappen was backed by the psychological battle between Mercedes and Red Bull bosses. The Red Bull team principal, Christian Horner, talked about his colleague smashing headphones during the Saudi Arabian GP. Horner claimed it was easy to pull Toto’s chain. He got to the Austrian on several occasions during last year’s championship.

Although Christian Horner confirmed that the battle was not personal in any way. Moreover, according to the former British driver, Wolff did a great job with Mercedes. The Austrian came to the sport from a completely different background than Horner. He said Toto was very much from a financial background. Hence, it was easy to pull Wolff’s chain. Horner added, “And you can see it. Sometimes it affects him.”

The Red Bull boss further mentioned that last year was the first time Toto found himself in that situation. Horner reckoned it was always interesting to find out how people react in tough situations. He concluded, “And they are smashing headphones and so on. You can see that you got to them.”

Share. Facebook Twitter Pinterest LinkedIn Tumblr Email
Previous ArticleLewis Hamilton Claims He Was Just F*****G With The FIA By Protesting The Jewelry Ban!
Next Article Rafael Nadal Did Not Think He Would Play Until His Mid-30s! Now Wishes To Achieve More