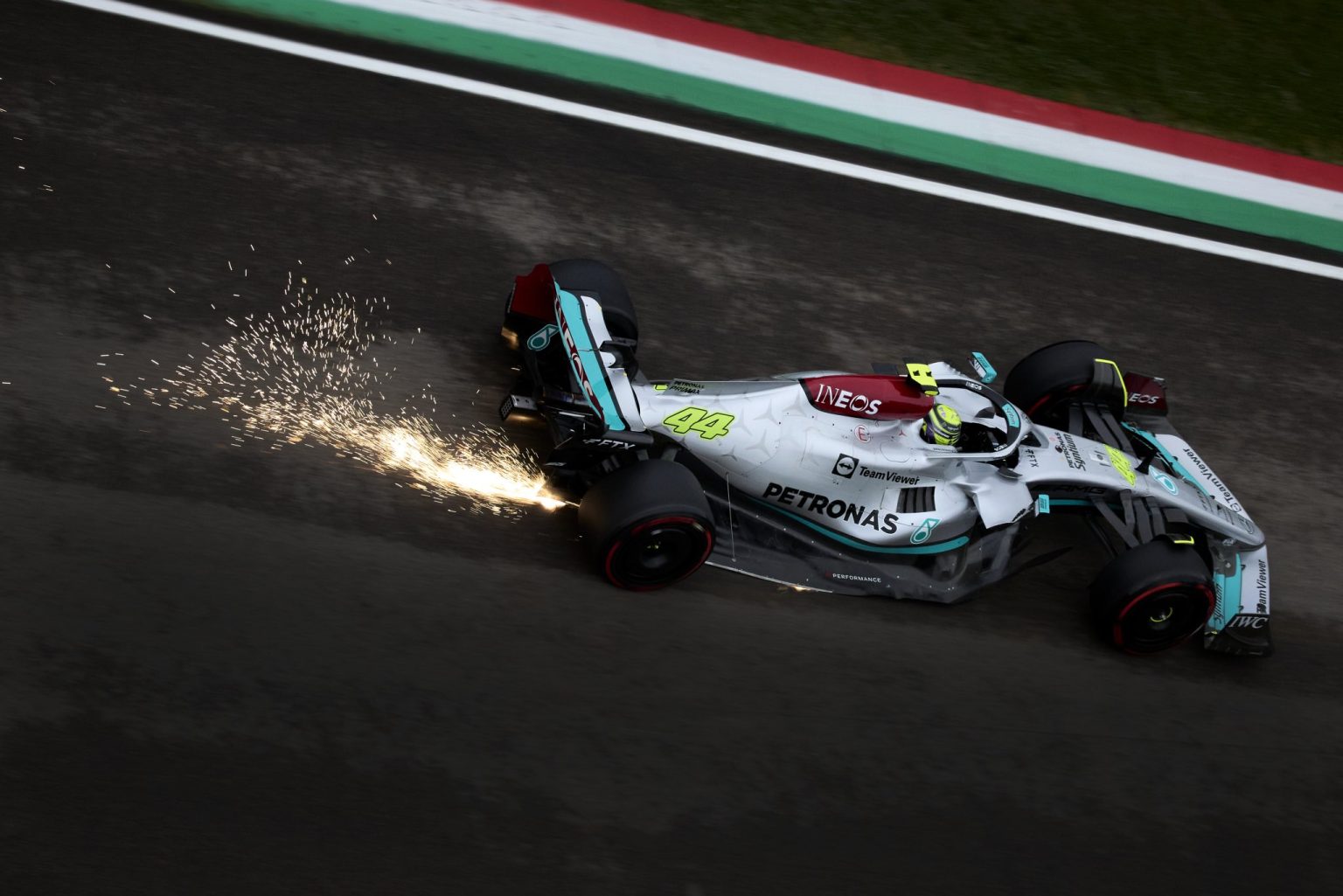 On Friday, Mercedes and Lewis Hamilton continued their struggles with their W13 racing car during the practice sessions ahead of the Emilia Romagna Grand Prix. Hamilton was almost knocked out during Q1 during The Imola Sprint race. However, the Briton managed to finish P15 and entered Q2, where he could not avoid an inevitable knockout.

Moreover, the Silver Arrows have not been able to find a solution to the W13’s dangerous porpoising, which is affecting the car’s performance on the racing circuit. And Lewis believes that winning his eighth championship title in 2022 would be a “tall order” given Mercedes’ struggles with FIA’s new regulations.

Mercedes shocked everyone in Formula One world with their W13s radical “no sidepod” design during the pre-race testing in Bahrain. The expectations of winning another world championship were high, but the unique design misfired for the Silver Arrows. Further, the frustrating problem Mercedes have is the violent bouncing of the car at high speeds due to a sudden reduction in the downforce called porpoising. The issue causes a risk of the cars getting damaged. Moreover, the drivers lose confidence while attacking the corners at high speeds with chances of flipping. Hence, the racing team was forced to increase the car’s ride height, resulting in performance loss.

Mercedes have faced porpoising in the previous seasons. But, they had an abundant amount of resources to fix the issue in very less time. Unfortunately, FIA’s newest rules limiting cost cap and restricting aero testings in 2022 have not yet allowed Mercedes to find a fix. However, Lewis Hamilton has not given up on the championship hopes yet. The 37-year-old veteran feels that there is still enough time to turn things around for Mercedes.

While Mercedes clearly struggled at the Imola Circuit on Friday, the former world champ sounded hopeful at the FIA press conference in Imola. Hamilton was asked about his opinion on Mercedes boss Toto Wolff’s prediction about having a twenty percent chance of winning the championship. Hamilton joked that he was not a mathematician and was unaware of the percentage chances. However, the British racing driver acknowledged that it would be definitely a tough ride for the Silver Arrows. Lewis added, ” It’s a tall order. That’s for sure.”

Mercedes can surely catch up with the frontrunners like Ferrari and Red Bull. There are 20 more races left in the season. Further, Lewis mentioned that his team has a long way to go. They still have enough time to turn this season around. Hamilton feels that Mercedes still have time to fix the W13’s design and extract its full potential. He also said that everyone at the Silver Arrows factory has been working very hard. The team is making the smallest bits of improvement to the W13. The British racer said, “We hope that we move slightly forward this weekend.”

However, Mercedes struggled during the Sprint races on Friday. And now, Lewis Hamilton and George Russell will participate in a short 21-lap dash on Saturday. Hamilton and Russell will also start today’s FP2 at P11 and P13. Hopefully, the Silver Arrows will have better results at the race trim, where the W13 performs better than the qualifying sprints. As per recent updates, Hamilton and Russell had good first laps on the Soft tires at the FP2.