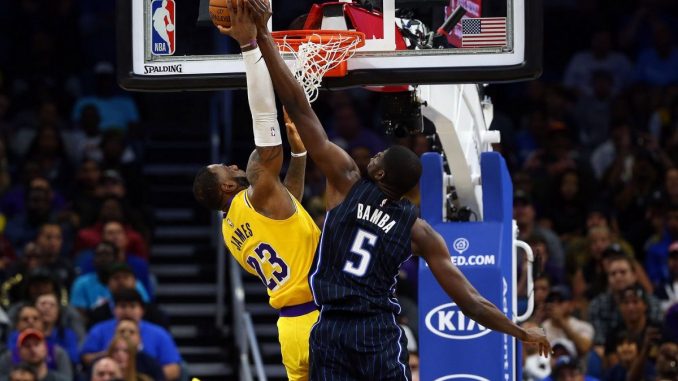 The Los Angeles Lakers front office will have a big job to do this summer. LA would look to make some crucial changes in their roster in order to rebuild a championship-winning team after Frank Vogel’s departure. Apart from injuries and inconsistencies, the one area where the Lakers lacked the most was the defense. The Purple and the Gold concedes 115.1 points per game during the 2021-22 season. The franchise ranks in the 28th spot out of 30, just two spots away from becoming the worst defensive team in the league. If the Lakers have to stand a chance for a championship contention next season, they will have to strengthen their defense by bringing in an expert player who can also contribute to the offense.

Recently, James LeBron’s buddy and NBA analyst Cuffs The Legend suggested that the Lakers should acquire Mo Bamba this offseason. The Orlando Magic center will become a restricted agent this summer. Bamba was drafted as the sixth overall pick during the 2018 draft in Texas. The 24-year-old has a career average of 7.7 points with 6.1 rebounds and 1.4 blocks. The New Yorker shoots 47.5% from the field, 35.2% from beyond the arc, and 68.5% from the free-throw line.

The Lakers desperately need a blocking center who can control the defensive game for the team and create some chances in the offense consistently. The presence of Mamba in the team could release some pressure on James and Davis. This will give them a chance to play freely as the youngster is good with three-pointers as well. Mohammed Bamba has averaged 10.6 points with 8.1 rebounds and 1.7 blocks during the 2021-22 season. Moreover, the Magic center has blocked 118 shots and scored 107 three-pointers this season.

What Would Lakers Need To Get Mo Bamba From Orlando?

If Bamba starts with James and Davis, he could do an excellent job of protecting the rim and provide the Lakers superstars some spacing on the floor by being a threat beyond the arc. As a restricted free agent, Bamba is at liberty to sign a contract with any team during the offseason. Orlando will have 48 hours to match the rival team’s offer or let the youngster walk away from the franchise.

Mo’s performance graph has been n the rise with each since he joined the Magic in 2018. This year, Bamba averaged 6.5 points with 6.0 rebounds in the two games he played against the Lakers. The youngster provides a golden opportunity for LA to strengthen their defense and have a three-point shooter in the offense. As per Spotrac’s Keith Smith, the Lakers have a taxpayer MLE of $6,392,000, which they will be able to spend this summer.

However, if the Lakers need to acquire Mo Bamba, they will have a clear major cap space to sign as the youngster made $7,568,743 during 2021-22. He has a qualifying offer of $10,096,703 with the Orlando Magic this summer. Thus, the easiest way to create a cap space is by trading Russell Westbrook. Russell will get $47,063,478 next season if he chooses his player option, which he most likely would.

Further, Smith reported that the Magic might offer Mamba a $50 million over four years contract, similar to Wendell Carter Jr. Both the players will remain tradable if the franchise needs a sport to bring in another player. Orlando also has the No. 1 overall pick in the 2022 draft. Hence, the Lakers will have to keep a close eye on Bamba. He seems to be a perfect match for James and Davis’s offense.