Kevin Durant Talks About Kyrie Irving, James Harden & Nets Getting Swept Out Of Playoffs By The Celtics! 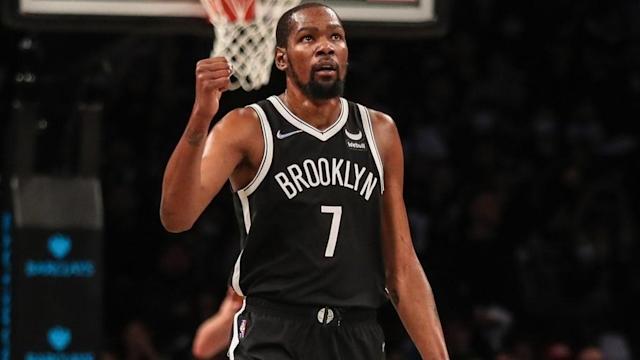 On Tuesday, the Brooklyn Nets were eliminated from the playoffs after their fourth consecutive defeat against the Boston Celtics. The Nets were defeated by the Celtics by 112-116, despite an impressive performance from Kevin Durant. The 33-year-old scored a whopping 39 points with seven rebounds and nine assists. But unfortunately, Durant could not avoid an embarrassing loss against the Celtics, which resulted in an elimination for the Nets during the first round of playoffs. After a disappointing game, Kevin Durant shared that he was discouraged but still confident about his future at the Brooklyn Nets and his bond with teammate Kyrie Irving.

The Celtics swept the Nets by 4-0 and ended all hopes of Brooklyn getting ahead in the playoffs. It was the first time in Durant’s 14-season-long NBA career when his team had to deal with a sweep. Kyrie Irving also never faced a sweep, with him missing a lot of games this season due to his vaccination status. Meanwhile, Irving told the reporters that he has no plans to leave the Nets as he has the opportunity to end his contract and enter the free agency this off-season.

Did Irving’s Absence Affect His Friendship With Durant?

Following the loss, reporters asked Durant whether he would be okay with Irving as a teammate in the future. Durant replied that he would love Irving to play more games. Kevin acknowledged that life is more important to him. He would not want to end his friendship with Irving because his stand against vaccination affected the Nets’ performance this season. The two-time NBA champ added, “Our friendship is based off who we are as human beings. The basketball adds to it.”

Kevin Durant had to carry the Nets on his shoulders after the franchise banished Irving. He was not allowed to play road games. Durant admitted that he and the team went through some tough moments without Irving. However, Kevin said that the season would not strain his friendship with Kyrie. The 12-time NBA All-Star said that he missed having conversations and playing together with Irving. But there was not much he could do or control. Durant told that the best thing he could do in Irving’s absence was come to work and be himself to make sure the situation on his team was right for everybody.

Kevin was aware that he could not force Irving to get jabbed and revealed that his frustrations were limited to tough nights. The 2-time MVP shared that he was not mad at Irving individually. But he would certainly be mad about not having Irving on the basketball court.

Lately, James Harden showed up at the training camp out of shape, and he seemed a little distracted. As a result, the Nets initiated a deadline trade for Harden to Philadelphia in exchange for Ben Simmons. However, Brooklyn did not play him the entire year. Harden has looked diminished. But it seems like he still would have assisted the Nets on the court compared to Simmons, who has been on the bench the entire series. Durant revealed that he wished things would have been different about James leaving the Nets. Kevin added that he was not bad but wished it was different. He said that these players are grown men who have a right to change their minds.

Kevin Durant has been an important part of the Brooklyn Nets. He knows that people have the perception that Kevin runs the franchise, from Irving being on the team to Steve Nash being chosen as the head coach. However, the two-time NBA champ said he sees himself as just another part of the machine. Moreover, Kevin feels that the media has created a narrative about players like him, LeBron James, and Steph Curry, that they control everything that comes and goes in the team. Talking about James, Durant mentioned that he might provide crucial input to the team, but telling the franchise which player to pick is not what LeBron does.

Further, Durant shared that he had been around Steph, and he does not work like that either. The Nets player told that he is just here to support his team’s decisions while letting people do their jobs. Durant admitted that he assisted in the recruitment of Goran Dragic, who was released by the San Antonio Spurs in February. Moreover, Kevin said that he had been more of an advisor than someone who controls decisions since he joined the Nets. The Nets star also clarified that he was not interested in getting control either.

Kevin Durant’s Talks About His Future

Durant will turn 34 in September, and he is coming off a playoff performance that he would like to forget. His best performance in the playoffs was 39-points in the fourth game against the Celtics. Unfortunately, Durant shot just 38.5% in the series while being swarmed by the Celtics’ defense. Moreover, Kevin turned the ball over more than he did in any of the playoffs throughout his career.

His performance this playoff has been completely opposite to what he pulled off last season. Kevin Durant played a crucial role in defeating Golden State Warriors in the finals. After his amazing performances last season, he was supposed to lead the team towards the top of the Eastern Conference. Moreover, Kevin started the season with MVP performances before suffering from a knee injury in January. And all his acclaim from last season’s playoffs took a big hit after the sweep from the Celtics.

Kevin Durant never believed that whoever plays well during a particular game night is the best player. Durant said that it is not his mentality as a player. The 12-time NBA All-Star added that he is looking to max out his years by how he gets up and approaches his craft. He thinks that everything is not always about the game’s result. Kevin follows the process because he genuinely enjoys waking up and going to work. Moreover, Durant clarified that he wants to win championships, have a great average, and feature in All-Star games. But, even if he does not get it, he would still be excited about being a part of the NBA.

Share. Facebook Twitter Pinterest LinkedIn Tumblr Email
Previous ArticleKyrie Irving Continues To Disappoint In Playoffs Without LeBron James, Hasn’t Reached A Final Since 2017!
Next Article Kyle Larson Aims To Get Back On Top Of Cup Series Standing After A Close Finish In The GEICO 500!