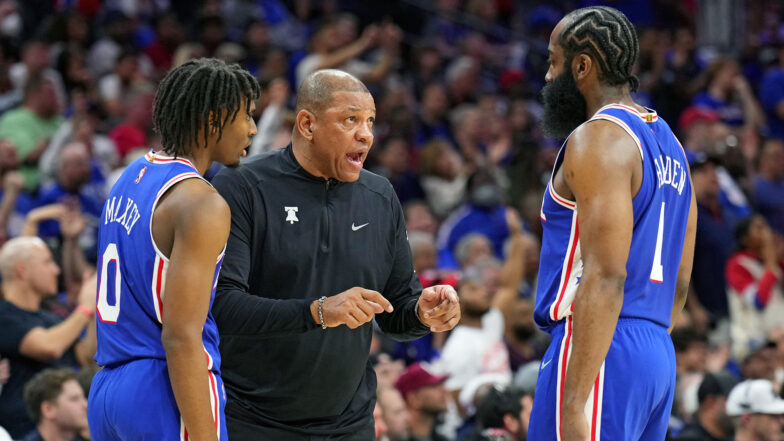 James Harden has undoubtedly been one of the most durable players in NBA over the last decade. However, the 32-year-old failed once more to lead his team into the final stages of the postseason. Recently, the Philadelphia 76ers title campaign came to an end in the conference semifinals after the Miami Heat won the six-match series by 4-2. Harden only scored 11 points with four rebounds and nine assists during his 43 minutes on the court. Meanwhile, former Philly player Jimmy Buttler put on a show against his former team by scoring 32 points with eight rebounds and four assists for the Miami Heat.

After their fourth loss of the series, the 76ers’ playoff run ended before reaching the finals. The team has another disappointing playoff run with their head coach Doc Rivers, who joined the franchise in 2020. Philly has lost in the conference semis for the second time in a row under Rivers. Hence, the franchise’s front office might consider parting ways with Doc this offseason.

Meanwhile, Harden was brought to Philly by the President of basketball operations, Daryl Morey. Fans and experts felt that James would help Joel Embiid to get his first title for the franchise. The trade was in action when the six-time All-Star Jimmy Buttler was sent to Miami in 2019. Buttler was performing far better as a primary ball-handler than Ben Simmons. Moreover, Simmons was traded to the Brooklyn Nets in exchange for the 32-year-old Harden during the mid-season trade. Thus, while Buttler has led the Heat to two titles in his first three seasons, Harden choked in yet another playoff run this season. Kendrick Perkins recently told that Rivers should move to the Lakers to get a title on his resume.

Doc Rivers joined the Philadelphia 76ers in 2020. He helped the franchise secure the first seed in the conference last season. However, Philly was defeated by the Atlanta Hawks in the semifinal series. The 2008 NBA champion coach is being held responsible for another postseason disaster for a team who were considered to be the title contenders this season. Just like Harden, Rivers has shown a tendency to lose the way in the postseasons. The last time Doc led a team to the finals was the Boston Celtics in 2010. However, the Cs lost to Kobe Bryant-led Lakers in the Finals. Before that, the Cs had defeated LA in 2008 to win the NBA championship.

Kendrick Perkins was with Boston when Doc Rivers was the coach there. The 37-year-old believes that Doc’s time with Philly is done, and he needs to move on. The 2008 NBA champ hoped that Doc would get fired from the 76ers. Perkins feels that Rivers needs to be with the LA Lakers with the assurance of LeBron James being in shape. Rivers could get a real shot with the franchise who are desperate to win. Kendrick further added, “Get him away from Harden. Carry the hell on.”

Perkins’ advice to his former coach is that he needs to focus on a fitter veteran in LeBron and leave a struggling Harden behind. If Rivers gets the job at the lakers, who are in desperate need of a good coach, he will have the opportunity to have a real shot at winning with a championship-winning team.