Is Sebastian Vettel Retiring From F1 Due To The Motosport’s Climatic Risks? 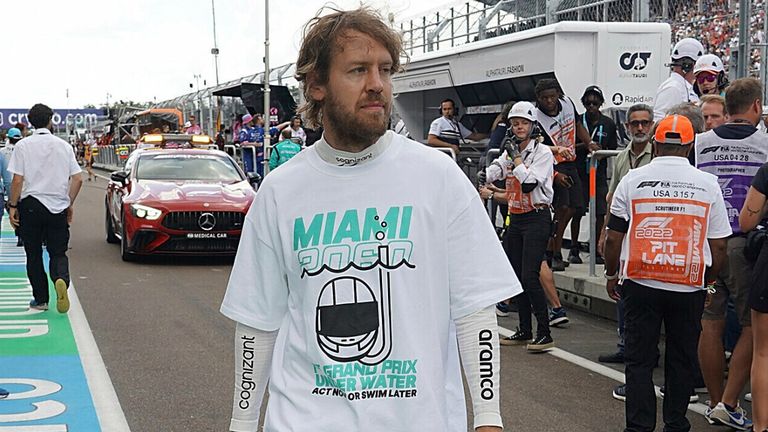 Last weekend, Sebastian Vettel donned a t-shirt before the Miami Grand Prix with a unique slogan. The quote on his t-shirt read, “Miami 2060- First Grand Prix Underwater- Act Now or Swim Later.” The German driver is an environment enthusiast, and he pulled off the move to highlight the climatic effects of F1 racing. The Aston Martin driver has previously spoken about the environment, human rights, renewable energy, and LGBTQ issues on numerous occasions. While Vettel has taken a stand to save the environment, his crucial role as a driver in F1 racing raises questions about him being a hypocrite.

On Thursday, the four-time world champ revealed that he is a “hypocrite” for focusing on his environmental concerns while continuing to race in Formula One. Vettel won four-consecutive championships between 2010-2013 for Red Bull. The German driver is also the youngest World champ in F1. During an interview on BBC’s Question Time, Vettel was asked if continuing to participate in the most gas guzzler motorsport actively makes him a hypocrite given his stand on saving the environment. The 34-year-old replied that the spectators are right to laugh, and it does make him a hypocrite. The Aston Martin driver shared that it is a question that he asks himself every day. Sebastian Vettel added, “I am not a saint but I am very concerned about the future.”

Sebastian further said that he asks himself whether he should be racing in Formula one and traveling the world. Vettel told that driving a car is his passion, and he loves it. The German racer loves stepping into a car, but he is left with a thought when he gets out of the car. Sebastian shared his thought, “Is this something we should do, traveling the world and wasting resources?”

Talking about F1’s entertainment perspective, Vettel mentioned that motorsport was one of the first sports to start again during Covid 19. The Aston martin drivers joked that the races were still going on when everybody was losing their minds. The German racer pointed out that F1 offers sports, comedy, culture, and a platform for artists to perform during the weekend. Sebastian Vettel feels that a lot of people have missed F1’s absence. Thus, as per Sebastian, “If we did not have this in general, we would probably go mad.”

The four-time world champ shared that there are certain things he can and cannot control. Moreover, there are things Vettel does because he feels he can do them better. The Aston Martin driver stated that he would not take a pane when he had the option of taking a car.

Lately, F1 bosses have claimed that the sport will achieve a net zero-carbon footprint by 2030. The racing organization has plans to use 100% sustainable fuels when a new engine is introduced in 2026. Thus, F1 is taking active steps to decrease its carbon emissions which are extremely harmful to the environment. And hence, while Sebastian Vettel continues to remind the world to save the environment openly, he would take pleasure in remaining a part of the sport and improving it from the inside. However, Vettel’s contract with Aston Martin will end after the season. Therefore, it will be interesting to see what choice Vettel makes next year.