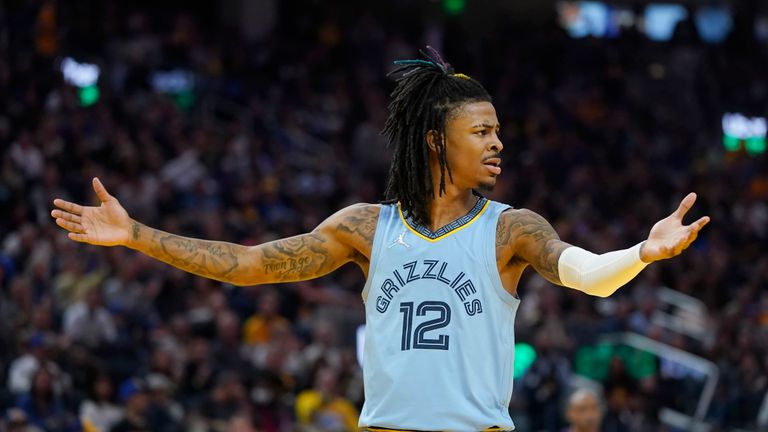 On Wednesday, Memphis Grizzlies will play a crucial Game 5 in the Conference Finals against the Golden State Warriors. The Grizzlies have lost three of the first four games of the series. With only three games left to play, Memphis desperately needs a win to keep their championship hopes alive. However, the biggest problem for Memphis during the fifth game could be the absence of their in-form point guard Ja Morant. The 22-year-old has been sensational in the last three playoff games for the Grizzlies. Morant has averaged 38.3 with 8.3 assists, 6.7 rebounds, and 3.0 steals. The Grizzlies’ point guard has made 62.4 percent of true shooting with a usage rate of 34.5 percent.

Unfortunately, Ja Morant got injured during the second half of Game 3 on Saturday. He injured his knee and was not available for the fourth game. The Grizzlies lost both the games against Golden State, building up the chances of elimination in the conference semifinals. On Tuesday, the team announced that a recent MRI report suggested a bone bruise in Morant’s right knee. Therefore, Morant has been listed as doubtful for Game 5 of the semifinal series. If the 22-year-old misses out, it could be the end of the championship run for the Memphis Grizzlies.

How Did Ja Morant Get Injured?

Memphis coach shared that Ja Morant’s injury occurred when the Warriors guard Jordan Poole “yanked” his knee in an attempt to steal the ball. The incident happened in the fourth quarter with 6:19 minutes remaining on the clock. Morant was forced to leave the field soon after.

The 2022 NBA All-Star shared a tweet after the game. Morant tweeted that Poole “broke the code.” The tweet was deleted quickly for unknown reasons. But, the post was directed towards the suspension of Grizzlies wing Dillon Brooks for Game 3. Brooks was suspended for committing a harsh foul against Golden State’s Garry Payton II. The Warriors guard fractured his elbow due to the foul. So, while Brooks was suspended, there was no action taken against Jordan Poole.

Meanwhile, the Golden State guard Klay Thompson was upset with the Memphis coach’s implication about Jordan Poole. He does not think that Poole should be blamed for Morant’s injury. The three-time NBA champ feels Jordan is not strong enough to affect someone’s knee. Moreover, Thompson advocated that his team was not trying to hurt people. He thinks that the Warriors “play the game the right way.” The five-time NBA All-Star added, “And I don’t think there’s any malicious intent from Jordan.”

Morant has been on song in the nine playoff games he has played so far. The 2020 Rookie of the Year has averaged 27.1 with 9.8 assists, 8.0 rebounds, and 2.0 steals against the Timberwolves and Warriors. Earlier in March, Morant missed nine games due to a right knee injury. He was sidelined for two weeks. Moreover, the Grizzlies point guard said on April 24 that he was not completely healthy after Game 4 during the Minnesota series.

Memphis did well during the regular season in Morant’s absence with a record of 20-5. The team’s efforts allowed them to finish second seed in the Western Conference. Meanwhile, the Grizzlies tried to replicate their performance during the fourth game against the Warriors. Unfortunately, the players ran out of steam and lost 101-98 to Golden State. The Grizzlies were outscored by the Warriors 39-29 during the fourth quarter.

Memphis scored just 94.2 points per 100 possession in Morant’s absence. Tyrus Jones replaced Morant and played for 41 minutes, the highest he has played this season. The offensive stat is Memphis’s worst since their January loss against Dallas. Sadly, Morant might miss the defining game five on Wednesday with the Grizzlies 3-1 down in the series. The Memphis Mavericks really need their star point guard, who has been excellent against the Warriors before his injury.