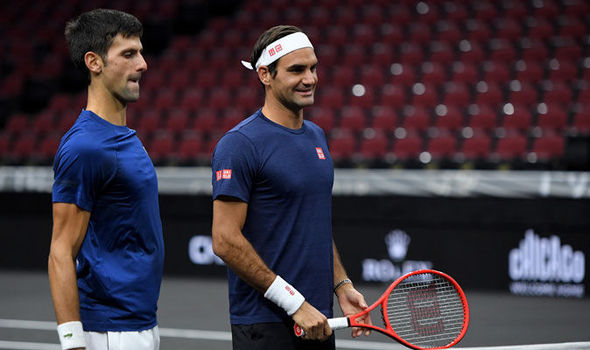 Novak Djokovic and Roger Federer are the two greatest legendary figures in the world of tennis. Nole and Federer, along with Rafael Nadal, are the big three of tennis who have ruled the sport for the most part of the last two decades. Moreover, Djokovic and Federer both have won 20-Grand Slams each, just one less than Nadal, with record 21 titles in the men’s singles category.

The legendary duo has been involved in one of the fiercest on-court rivalries in the sport. The Serb has won 27 out of 50 matches against Roger Federer. Only Djokovic and Nadal have played more games (58) on the men’s tour. While they are each other’s biggest rivals on the court, Nole and Federer share a respectful bond with each other. None of them have ever lost their cool and said something offensive to each other. In this article, we will look at all the famous statements that Djokovic has given out about Roger Federer.

Djokovic Wonders If Federer Is From The Same Planet

Back in 2006, Novak Djokovic faced Roger for the second time during the Davis Cup World Group playoffs in Switzerland. The Swiss emerged as the victor with 6-3. 6-2. 6-3, taking his nation to a tie. Federer was the world no. 1 at that time, and Nole was only 19.

After his defeat, the Serb stated that he was playing his best tennis and tried different ways to prevail over the Swiss, but nothing worked. Further, Djokovic said when you are in the best form, Federer still comes up with great shots. Nole added, ” You really have to wonder if he’s from the same planet.”

Djokovic struggled during his initial encounters against Roger Federer and lost the first four matches. The Serb finally managed to clinch his first victory against The Swiss at the Canada Masters in 2009. Nole beat Federer 7-6(2), 2-6, 7-6(2) during the finals in Montreal. Novak praised his opponent’s potential during the trophy distribution event. Djokovic told that winning against probably the best player ever in the sport was a dream for him.

Djokovic Handed A Win To The Swiss In 2015

At the round-robin stage during the 2015 ATP finals in London, Federer beat Novak Djokovic by 7-5, 6-2 in a two-set encounter. The Swiss giant ended Djokovic’s 23-game winning streak. The Serb appreciated Roger and suggested that he gave away the victory to Federer with his poor performance on the court.

Nole mentioned that there are days when a player cannot feel even close to their best. He credited Roger for mixing up the pace and always giving Djokovic a different ball by using the slice and spin nicely. Further, Novak acknowledged that he handed the win to the Swiss, especially in the second set. The world no. 1 felt that he allowed Federer to penetrate through the ball and dictate the game’s tempo from the baseline.

Djokovic Credited Federer For The Player He Has Become

During the 2018 Laver Cup, Nole and Roger teamed up for the only time in their careers to represent team Europe. The two tennis legends faced a three-set loss against team World’s Kevin Anderson and Jack Sock. Prior to the game, the Serb told credited Federer for the player he had become. Nole also shared that they were excited about the unique challenge. The 20-time Grand Slam winner told that he and Federer never played doubles together, and the competition allowed them to play together.

Djokovic Claims Roger Is Very Talented & Has A Perfect Game

Novak Djokovic convincingly defeated Roger Federer during the 2019 Wimbledon Championship. Nole beat the Swiss in a remarkable five-set final after saving two championship points. During the post-match conference, Djokovic revealed that it was probably the most demanding match he had ever been a part of. The Serb admitted that his previous most demanding game was against Nadal in the Australian Open finals in 2012, which went on for six hours. However, Nole told that his encounter with Federer was at a different level mentally.

Meanwhile, Novak Djokovic told how tough it was to compete against Roger on any surface. But playing on the grass during a final resulted in lots of pressure because the Swiss stayed close to the line.

During the 2019 ATP finals, Federer beat Nole by 6-4 and 6-3 to head into the semifinals. Djokovic shared his opinion on Rogers’s performance. The Serb told that Federer motivated him, and he has the utmost admiration for Roger and everything he does on the court. Nole added, “What he has achieved over the years and what he’s still showing on the court is phenomenal.” Novak also claimed that Federer was one of the toughest opponents he had faced in his career.

Rogers’ Achievements At His Age Are Inspiring For Nole

Novak Djokovic broke Federer’s record of 311 weeks as the world no. 1 on the ATP rankings in March 2021. During his interview with the BBC, the Serb paid tribute to his Swiss rival. Nole said that what Roger was doing at his age was something very inspiring for Djokovic. The world no. 1 was happy to see Federer’s return. Nole revealed that the two highest challenges when he entered the tennis world were defeating Federer and Nadal. When Nole won his first Grand Slam in 2008, he thought it was his chance to go after the two great players. However, the Serb had to wait three years to win a major title and lost most of his big matches against them.