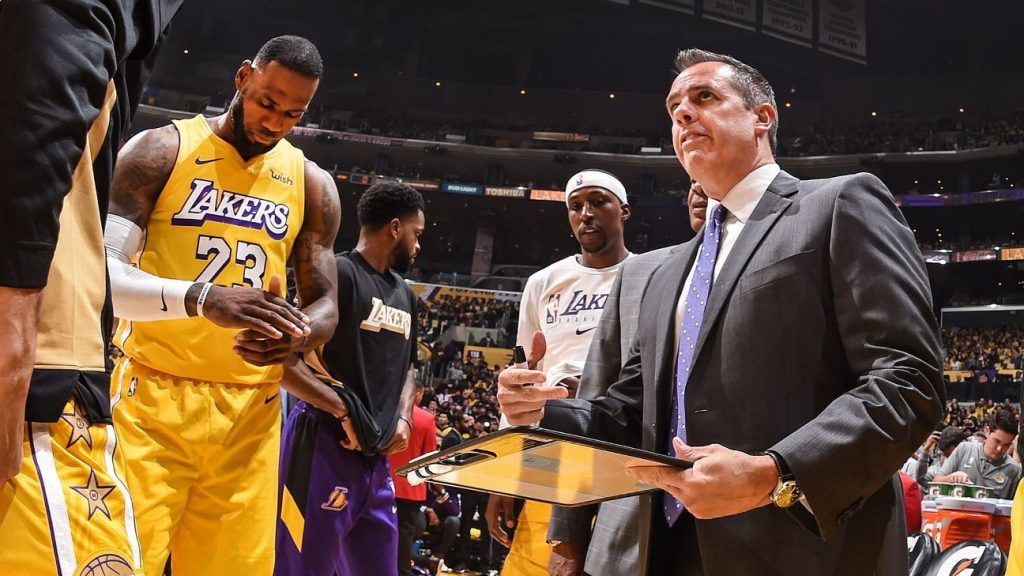 Sunday’s game against the Denver Nuggets was possibly the last match for Frank Vogel as the head coach of the Los Angeles Lakers. The Lakers won their final game of the season against the Nuggets by 146-141 in overtime. Unfortunately, the Lakers were eliminated from the current season following their defeat against the Phoenix Suns last Tuesday. It is no surprise that the Lakers had already made up their minds about letting go of their head coach after three seasons following a disappointing 33-49 record in 2021-22.

The Lakers were considered the favorites in Western Conference during the preseason. But LA could not even make it to the playoffs. They fought miserably to keep their play-in hopes and eventually failed. As per an NBA source, the Lakers management will break the news to Vogel on Monday. The Lakers would be looking for his replacement which would be quite expensive and tiresome as there are no clear-cut frontrunners as of now. Vogel signed a three-year contract with the Lakers in 2019. He led the team to the 2020 NBA championship during a COVID-affected season. He received a one-year extension through 2022-23 last offseason.

Frank Vogel Opens Up About Leaving The Lakers

Vogel and the Lakers have really struggled to maintain consistency on the court. Injuries to their star players like LeBron James and Anthony Davis have affected their campaign terribly. Moreover, the limited options in shooting and athleticism were major concerns in the Lakers’ roster this season. LA is the only team whose single five-man lineup has not played for 100 minutes together.

The Lakers had high expectations from Russell Westbrook when they acquired him to play alongside James and Davis. However, the trio has played only 21 games together this season, and the Lakers lost ten of them. The move has failed miserably. And the Lakers will find themselves in a mess when they try to trade Westbrooks during the upcoming offseason.

Further, the Lakers lost 18 of their last 24 games after the All-Star break. Only Portland Blazers, Indiana Pacers, and Huston Rockets have a worse record than LA. The team has also struggled a lot with their defense, often throwing the game away during the fourth quarter. The Lakers’ defense has been ranked 21st in the defensive standings after finishing first in 2020-21 and third in 2019-20. Frank Vogel has struggled to keep the team in shape during the season, with no real support from the front office.

After Sunday’s game, Frank revealed that he had not been told about his future at the Lakers so far. He said he would enjoy Sunday’s win and celebrate what the young guys achieved by getting back into the game and securing a win. Frank said that he would deal with the coaching situation on Monday.

Lakers’ rookie player, Austin Reaves, achieved a triple-double by scoring 31 points with 16 rebounds and ten assists against the Nuggets on Sunday. During the post-match interview, the 23-year-old told that it was good to go out and win for Vogel and the team. Austin played a crucial role in supporting his teammate Malik Monk who scored 41 points with four rebounds and an assist.

Monk revealed that Frank kept his cool throughout the season no matter the team’s situation. Vogel did not mention anything about his job during the team meetings. Malik added, “He came in and worked and always gave us a great game plan. He was always about us.” Monk understood how tough this season had been for Vogel, and he still kept his cool and never changed his demeanor.

Vogel led the Lakers to the 2020 championship title in Orlando, Florida. He made sure that the franchise was among NBA’s best defensive teams during his first two years at LA. Unfortunately, Vogel has clearly been made a scapegoat by the Lakers. However, all the blame for a terrible season cannot be put on Frank Vogel, who will look for a coaching role at another franchise for the next season.