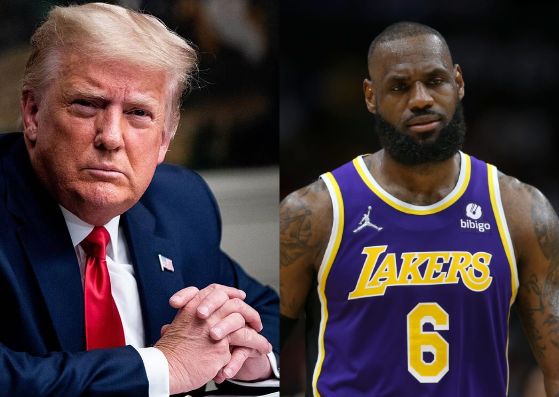 On Saturday, former President Donald Trump targeted LeBron James once again during a political rally in Nebraska. Trump spoke at the rally to show his support for a controversial Republican gubernatorial candidate. The former US President has been involved in a one-sided feud with the Lakers legend after James offered his support to Trump’s opponent Democratic party, during the 2016 and 2020 presidential elections.

Although the history between Trump and James has changed a lot over the years. Initially, Trump praised LeBron after the latter won an NBA title with the Miami heat. However, things went downhill after James made a critical decision against the former president. Since then, Donald Trump has been taking shots at LeBron James. However, James has ignored the attacks by shifting the focus on social justice issues which are far more important to the King.

In a recent attack, Donald Trump brought up LeBron during a speech in Nebraska. Trump asked James to join his non-existent women’s basketball. It is not the first instance when Trump has envisioned himself as a basketball coach of a women’s basketball team. Last year in July, Trump made a similar comment where he suggested getting transgender players in his women’s basketball team if he was a coach. He also targetted King James, asking the Lakers superstar to consider a sex change.

During the recent rally, the former US President said that he does not like LeBron James a lot. However, he asked James if the King ever had any thought about “going woman”. Because if he did, Trump would love to have James on his basketball team.

Trump Mocks James To Get Attention

Trump does not own a basketball team and was trying to gain some attention for himself and his Nebraskan candidate by sparking a controversy. The gubernatorial candidate, Charles Herbster, is a controversial personality as he has been accused of harassing eight women. However, it is not the first instance Donald Trump has shown his support to a controversial candidate. The former president is also known to have had ties with Jeffrey Epstein. While James might have a lot of dirt on Trump, the King would most likely not respond to the absurd comments made by Trump.

Last year, LeBron criticized Trump after a group of supporters broke into Capitol Hill in Washington DC. James said that we live in two Americas, and the incident was a prime example of that. The Lakers giant questioned if Americans would want their kids and grandkids to live in this beautiful country. He suggested that if people don’t understand the consequences of their actions, they need to take a few steps back.