Yankees’ Pitcher Frankie Montas Concedes Big During His Bronx Debut Even Though New York Lost By 9-2! 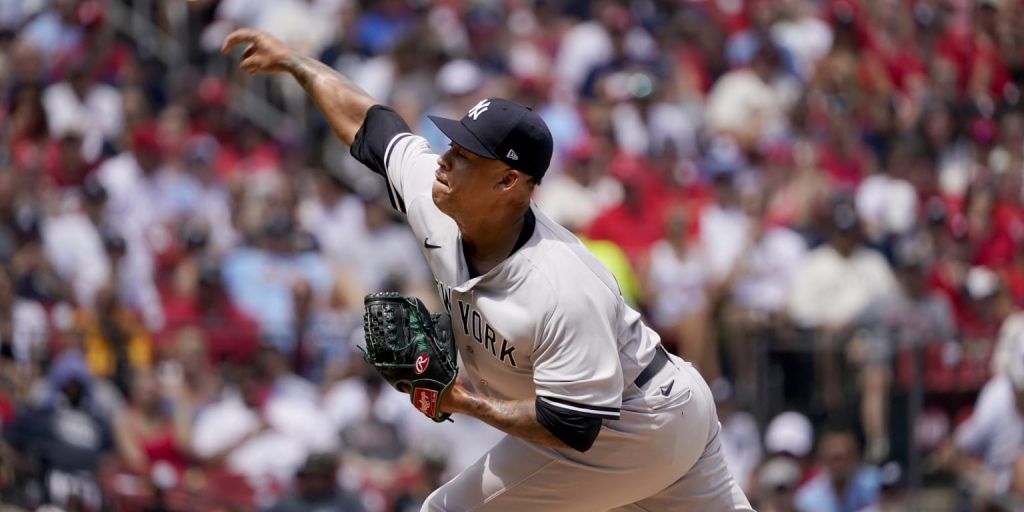 The New York Yankees were hoping to carry on the momentum from Wednesday’s win, which saw Josh Donaldson seal the game with a three-run grand slam. However, the team entered the Bronx stadium to play the first game of the series against the Blue Jays, losing embarrassingly in front of the home crowd by 2-9. The Bombers have really struggled since the All-Star break, losing eight of their last ten games. The team is facing some real troubles in the offensive and pitching department, flooded by injury and lacking consistency.

Things got worse for the Yankees on Thursday as their deadline prospect Frankie Montas made his debut at the Yankees stadium. The Pinstripers were eyeing Luis Castillo. However, they were unwilling to part ways with their young shortstop Anthony Volpe to get Castillo. Hence, Cincinnati traded Castillo to a more resourceful Seattle, and the Yankees were left to trade for Oakland’s Montas. They believed that the 29-year-old was not different from Castillo and available at a much lower price. However, the Yankees did really see the difference on Thursday as Montas conceded six runs against the Blue Jays, with eight hits in six innings. The worst moment of his outing was Valdimir Guerrero Jr. hitting the Yankees pitcher for a three-run homer.

Can Montas Turn Thing Around For The Struggling Yankees?

The Yankees are stumbling badly with little time left in the playoffs. Thus, Montas conceding 24 runs and 18 hits in his first 14 innings as a Yankee is quite a concern for the team. The Bombers cannot afford to keep losing. It will hurt them in terms of home-field advantage against the Astros during the ALCS. Montas replaced Montgomery at the Bronx, who is now doing a great job for the Cardinals. Thus, while Montas has the rest of the season to prove his worth, he needs to come back to his best fairly quickly to keep the World Series 2022 dream alive.

After a rough night at the Bronx, Montas admitted that it was not like a regular night game against the Blue Jays. He felt a lot of emotions at the Yankees’ stadium. Frankie reckoned he wanted to go out and do his best. But, his performance on Thursday did not really turn out to be his best.

Meanwhile, Yankees manager Aaron Boone could not believe that the jitters struck Montas. He did not think any lingering shoulder inflammation issues were the reason for Frankie’s terrible outing. Boone insisted that his team really needs to start getting results. Hopefully, Montas will get back to his best soon and put up crucial performances to help the team move forward.