Who Is Jamahl Mosley’s Wife? Did She Have An Affair With Andrew Bynum? Details Revealed 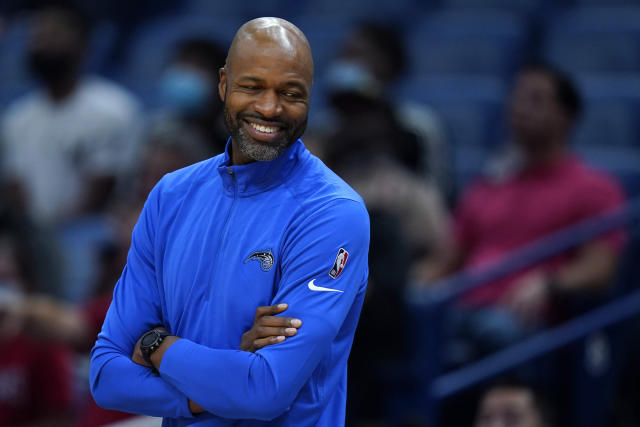 Born on October 6, 1978, Jamahl Mosley is a former professional basketball player from Milwaukee, Wisconsin. Back in his time, he represented Colorado Buffaloes and is currently the coach of the Orlando Magic. However, fans started taking a keen interest in Jamahl’s personal life after the rumors of his wife having an affair with Basketball player Andrew Bynum surfaced. But what is the truth? Let’s take a look at who is Jamahl Mosley’s wife and what the controversy was.

Jamahl Mosley represented the Colorado Buffaloes while he was a student-athlete, and in 2000, he was chosen for the Big 12’s third team. Mosley began his professional career in Mexico with Petroleros de Salamanca in 2001 before joining the Australian National Basketball League’s Victoria Titans (NBL). In 2002, the league recognized him as its best sixth man. In 2003, Mosley committed to play for Baloncesto León and spent one season there. He played with Seoul Samsung Thunders in South Korea, where he concluded his playing career and Korihait in Finland for a combined portion of the 2004–05 season.

Even after his playing days were over, Mosley never bid farewell to the basketball court as he started his new journey sharing his basketball skills and insights with new superstars as a coach. In 2005, Mosley began working as a scout and player development coach for the NBA’s Denver Nuggets. In 2007, he was elevated to the position of assistant coach. From 2010 until 2014, Mosley served as an assistant coach with the Cleveland Cavaliers. But in 2014, he was hired as an assistant coach by the Dallas Mavericks. In 2018, Mosley was hired by the Mavericks as their defensive coordinator, where he oversaw the defense’s tactical plans. Mosley assumed the position of Orlando Magic head coach on July 11, 2021.

Who Is Jamahl Mosley’s Wife?

The Orlando Magic’s coach has had a successful run in both the phases of his career as a player and as a coach. Meanwhile, not much spotlight has been shed on his personal life. Currently, Mosley is Married to Kristina Anderson. After a few years of dating, the pair were married in 2016 in a grandiose ceremony in Rancho Valencia in Rancho Santa Fe, California. NBA players DeAndre Jordan, Baron Davis, Tristan Thompson, Chauncey Billups, Marcus Camby, and Byron Scott attended the wedding.

There isn’t much information available on her in the public domain because Kristina has been maintaining a low profile. Yet we are aware that she has been living a happy married life with her husband and their lovely children. She is a career-oriented lady who has established herself as an expert in marketing, public relations, and sports. Kristina and Jahahl are the parents of three children. The name of their daughter is Jemma. Their sons go by the names CJ and Chance. They’ve been in a marriage for five years.

Did Jamahl Mosley’s Wife Have An Affair With Andrew Bynum?

The reports that Andrew Bynum was having an affair with Jamahl Mosley’s then-fiancée Kristina Anderson began to circulate in 2013. According to several rumors, Kristina and Andrew had relations. Numerous websites have accused Andrew of being the guilty party. Bynum was placed on indefinite suspension by the Cavaliers soon after the rumor spread across the media. He was prohibited from participating in any team activities, such as traveling with the squad or going to the practice facility.

Bynum was suspended when the suspicions surfaced. But neither the Cavaliers, Kristina, nor Bynum responded to the allegations. Jamahl Mosley, Kristina’s husband, likewise remained silent throughout the entire situation. It thus came to be dismissed in the future as mere conjecture, and it slowly faded away. Other than that, Kristina and her husband have never been involved in any rumors or controversy.

Also, read Kareem Abdul-Jabbar Wife: Know All The Details About The NBA Star And His Personal Life!