Who Are The Contracted Drivers During The 2022 F1 Championship? 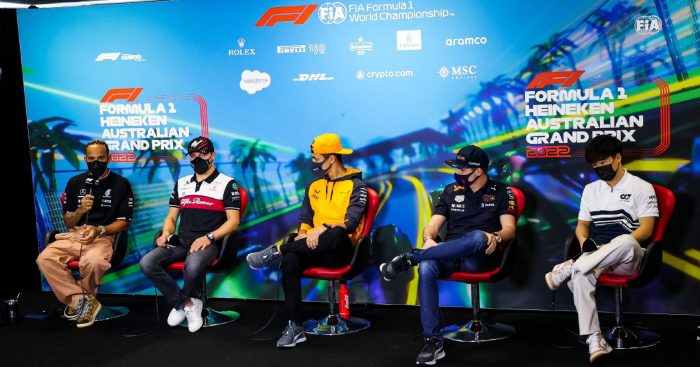 Winning a racing championship in F1 is the subtle combination of drivers with high skills, immense confidence, and high-performing cars prepared by the best engineering heads in the world. Thus, the F1 racing teams seem to stick with top-tier drivers so they can continue to perform consistently across multiple seasons. The contracts are highly beneficial for the drivers and racing teams alike. The racers get a positive environment, best-performing vehicles, and secured pay. While the racing teams get an asset that can lead them in the racing circuit for a long time.

Recently, Ferrari announced a two-year deal for Carlos Sainz ahead of last week’s Emilia Romagna GP in Imola. Sainz moved from McLaren to Ferrari for a two-year period, which the Scuderia had extended until 2024. With that, almost a quarter of the current year’s F1 grid is under contract until the end of 2022. In the following article, we will discuss the current contracts for all the 20 F1 drivers in the 2022 racing championship.

The partnership between Mercedes and Lewis Hamilton has been one of the most successful combinations in Formula One’s history. Hamilton joined Mercedes in 2013 and won four championship titles for the racing team between 2017 and 2019. Moreover, the German manufacturer won the last eight constructors’ championships. However, 2021 was a breath-taking year for the racing team as Lewis Hamilton failed to clinch his fifth title with Mercedes in Abu Dhabi. The Briton lost the championship against Red Bull’s Max Verstappen. There were rumors that the seven-time world champ would retire from F1.

The 37-year-old agreed to a new deal until the end of 2023 last summer. However, Hamilton’s future is uncertain after his struggles during the current championship. But, it seems that Lewis would like to become the most successful driver in F1 history with his eighth title win before walking away. It might not happen this year, but the feat is still on the cards for the British racer.

Meanwhile, George Russell replaced Valtteri Bottas at Mercedes in 2022. The young Briton has had a strong start to the season as he stands fourth on the drivers’ standings in his first year with the Silver Arrows, ahead of Hamilton. Russell is just 24-year-old and has a great career ahead of him. Therefore Mercedes signed the British racer until the end of 2023. The racing team will try to create another long partnership with George as they did with Lewis Hamilton.

The reigning world champ Max Verstappen achieved an incredible feat with Red Bull by winning his first Fe championship title in 2021 at the age of 23. Verstappen has been with the Red Bull racing team since 2016. The Dutchman received a substantial pay hike and a long-term deal from Red Bull. The racing team is hoping to keep the Verstappen until the end of the decade. If both sides stick to the deal, Max will star with Red Bull for at least 12 seasons. He is going strong with two early wins this season and is currently involved in a strong battle with Ferrari’s Charles Leclerc. Verstappen has signed a contract with Red Bull until the end of 2028.

However, Sergio Perez’s future at Red Bull is a little uncertain. The Mexican driver replaced Alex Albon in 2021 in a one-year deal. Fortunately, Perez’s contract was extended by the racing team until the end of 2022. Sergio recently finished second behind his teammate Max and is having a good time on the court. However, Red Bull might renew Sergio’s contract as there have been rumors about Hamilton replacing him at Mercedes. Thus, the 32-year-old has a contract with Red Bull at the end of 2022.

Ferrari has been the frontrunner during the early stages of the 2022 championship. Charles Leclerc is leading the way for the Scuderia with two wins so far. Leclerc replaced the 2007 world championship winner Kimi Raikkonen in 2019. After a tough couple of seasons with Ferrari, the 24-year-old is a strong contender to win this year’s championship and is currently on top of the drivers’ rankings. The Monegasque is currently under a contract with the Scuderia until the end of 2024.

Moreover, in 2021, Carlos Sainz Jr. replaced Sebastian Vettel at Ferrari in a two-year deal. Both sides were interested in extending the contract. Recently, the Scuderia extended the Spanish driver’s contract until the end of 2024. Thus, Charles and Sainz will remain teammates at Ferrari until 2024.

McLaren signed Lando Norris in 2019. During his debut -year, McLaren extended his contract until 2022. Further, the racing team added another extension to keep the British driver until 2024. Earlier this year, Lando Norris received another extension until the end of 2025. Previously, the 22-year-old also commented that he would not mind spending his whole F1 career at Mclaren.

Meanwhile, Daniel Ricciardo moved to McLaren, replacing Carlos Sainz Jr. in 2021. The Australian described his deal to be a three-year association last season. Thus, the 32-year-old will remain at McLaren until 2023. However, it will be interesting if both the parties honor the contract if the struggles for Ricciardo continue in 2022.

Alpine racing team is currently in contracts with Fernando Alonso and Esteban Ocon. The racing team hired Alonso in a two-year deal last year. However, there was a great deal of skepticism about his stay at Alpine in 2022 with Oscar Piastri’s presence in the stables. The 40-year-old revealed that he would like to continue racing for two or three more years. Alpine would not like to risk using a young and talented driver like Oscar Piastri, and hence, Fernando’s run for Alpine may conclude at the end of 2022. However, Alonso would be in demand for his experience, speed, and high profile.

Meanwhile, Esteban came to Alpine in 2021. The racing team extended the 25-year-old’s contract last summer until the end of 2024. After staying a season and a half for Renault/Alpine, the French driver has proven he is worthy of a long-term contract. Ocon put up a brilliant show by winning the Hungarian Grand Prix last season.

The rebranded Scuderia Alpha Tauri retained Pierre Gasly in 2020. Earlier this year, Alpha Tauri revealed that both Pierre and Tsunoda would represent the racing team in 2022. Moreover, the French driver has a contract with the wider Red Bull organization, and his contract could possibly be extended until 2023.

Meanwhile, Yuki Tsunoda was retained by Alpha Tauri in 2022 despite his inconsistent run during the debut season. The 21-year-old has had a decent start to the 2022 season. However, the Japanese driver dealt with a couple of retirements. He might continue ahead for Alpha Tauri unless he receives a better deal from other racing teams. Yuki’s current contract with Alpha Tauri will take him until the end of 2022.

Sebastian Vettel joined Aston Martin in 2021, replacing Sergio Perez. The 34-year-old has won four championships in his career. However, he missed the first two races of the season in Bahrain and Saudi Arabia after being tested positive for Covid 19. His future at the racing team looks a little uncertain after Aston Martin’s rough start during the 2022 championship. The German driver’s contract with the racing team will end in 2022.

Moreover, Lance Stroll also joined Aston Martin in 2021 to partner up with Vettel. The racing team retained the Canadian driver in 2022 and might receive an extension depending on his run running the 2022 championship. So far, there have been troubles for both the drivers. But, Vetten and Stroll managed to finish eighth and tenth during the Emilia Romagna GP in Imola.

Alex Albon joined Williams in 2022 by replacing George Russell. However, Albon retains a link with Red Bull, and the racing team might recall him in 2023. The Thai driver might return to Red Bull or extend his contract with Williams for one more year.

Further, Nicholas Latifi debuted for Williams in 2020, replacing Robert Kubica. The Canadian driver’s run for the racing team may come to an end during the final year of his deal. Amid Williams’ struggles this year, the financial opportunity that Latifi brings might not be enough to get an extension next year as his deal ends in 2022.

After ending his long run with Mercedes, Valtteri Bottas joined Alfa Romeo in 2022 in a multi-year deal. The contract is believed to be a 2+1 arrangement, which means two assured years with an option of a year’s extension. Thus, The Finnish driver is likely to stay at Alfa Romeo until 2024.

Moreover, Zhou Guanyu debuted for Alfa Romeo in 2022, partnering up with Bottas. The racing team has signed the Chinese driver for one season until the end of 2022. It looks like the 22-year-old’s performance this season will define his future at Alfa Romeo.

Mick Schumacher made his F1 debut with Haas after a multi-year deal with the team. After his performance in 2021, Ferrari revealed that the German driver might be ready to drive for the Scuderia as early as 2023. His contact with Haas ends in 2022, and the 23-year-old might start the next season with Ferrari.

Kevin Magnussen drove for Haas from 2017-to-2022. He rejoined the racing team in 2022 after Haas terminated its contract with Nikita Mazepin following the Russian war on Ukraine. Magnussen returned to the team with a multi-year deal that will take the Danish driver until the end of 2022. Haas and Kevin’s deal could also turn out to be a 2+1-year deal, and he could stay with the racing team until 2024.