What Happened In Manchester United Vs. Arsenal Game That Led To Another VAR Controversy? Find Out Here 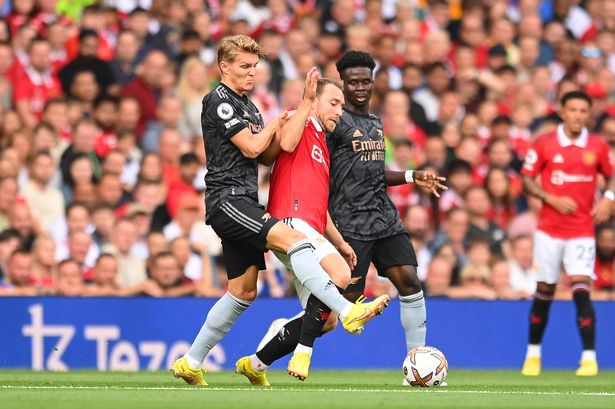 Manchester United vs. Arsenal FC has emerged as one of the most fierce rivalries in the Premier League since the 1990s. The giants clashed against each other once more on Sunday, September 4. And ManU, despite having a bad season, managed to defeat Arsenal 3-1. However, it was not the game’s result that made the big news. Instead, it was the VAR controversy that occurred during the game. If you are also wondering what it was all about, keep reading to find out!

What Is The VAR Controversy?

Following the Sunday match between Manchester United and Arsenal, the Video Assistant Referee (VAR) has again come under fire in the Premier League. Man U vs. Arsenal game witnessed controversy after VAR disallowed a goal by Arsenal’s Gabrielle Martinelli due to a foul on United star Christian Eriksen. Everyone, including commentators and spectators, questioned the decision. The experts believe that the foul should not have been regarded since it was soft. Therefore, the goal was fair and should have been allowed.

The recent addition to United, Christian Eriksen, was given a mild nudge by Norwegian midfielder Martin Odegaard. As a result, he lost balance and control. The Martinelli goal was set up by an excellent pass from Arsenal midfielder Bukayo Saka, who advanced with the ball. After consulting VAR, the decision on Odegaard’s tackle of Manchester United’s Eriksen ultimately went in favor of the home team. It sparked outrage among the visiting fans at Old Trafford and on social media, as this has been the case with most recent VAR judgments.

Mikel Arteta also offered his opinion on the subject. He stated that, unfortunately, nothing could be done now. The referee claimed it was a fairly soft judgment. However, Mikel does hope that the VAR will be more consistent in future decisions. Meanwhile, Manchester United player Michael Owen admitted that it was a foul but that the goal should have still been allowed. In a Tweet, Owen wrote, “This isn’t what VAR is for. It’s not there to re referee games. Yes, it’s probably a foul but it’s not a howler of a decision. I’m surprised that’s been ruled out. Although maybe I shouldn’t be.”

The incident occurred in the game when United was flying out of the gates. On Sunday, the decreasing number of VAR supporters received a new setback. The PGMOL, the organization representing referees, effectively acknowledged that the Saturday goals at Chelsea and Newcastle were incorrectly disallowed. Since its debut in the 2019–20 season, VAR has once more come under fire for being accused of stealing clubs’ wins and destroying matches with its relentless nitpicking.

Also Read Manchester United Legend Criticized Ronaldo For Being A Distraction To Everyone At Old Trafford!