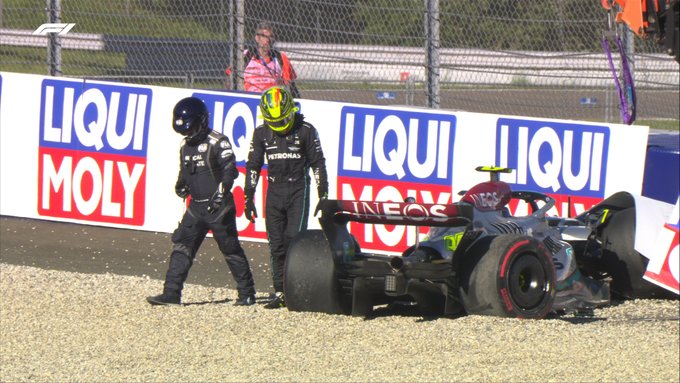 Mercedes had a rather interesting Friday at the Red Bull Ring as their W13 seemed to be performing better than their expectations. However, their excitement turned into misery during the final qualifying action of the day. Both Lewis Hamilton and George Russell crashed during Q3, causing some serious damage to their W13s. The Silver Arrows came quite closer to the front-running pace of Red Bull and Ferrari. But unfortunately, the sessions ended with both Mercedes drivers losing control of their cars during a push lap while Max Verstappen secured the provision pole for Saturday’s sprint.

Lewis had an encouraging Q3 as he finished third fastest on the grid. But, he dropped to eighth in Q3 and started a push lap to get back at the front. However, the Briton’s car unexpectedly gripped and slid through the gravel, making a sideways impact to damage both the front and back rear corners and chassis. Meanwhile, George Russell slid backward into turn ten and crashed into the barriers from behind. Recently, Mercedes boss Toto Wolff talked about the damages caused by the crashes on Friday.

Wolff revealed that Mercedes had to take a used chassis for Hamilton and new gearboxes have been installed. Meanwhile, George received a new rear wing, and several parts have also been replaced on their W13s. The Mercedes team principal also commended the late-night work done by the mechanics to get the cars in good shape for the sprint. He pointed out that Mercedes has already spent a third of their increased cost cap allowance to repair the damages. Toto said, “Yesterday in the garage, in the early evening, it looked really like somebody dropped a Lego Car on the floor.”

Could Mercedes Have Secured The Pole Position In Austria?

Toto Wolff reckoned that he would rather have a competitive car and end up crashing fighting for a pole than a car that gets P8 and drives “Steady Eddie.” The former Austrian driver shared that they had a competitive car, and Lewis was the fastest while attacking the last few corners. But Toto was unsure if the Silver Arrows could have fought for the pole. However, he insisted that Mercedes were just a tenth or a tenth and a half seconds behind the frontrunners.

Wolff further mentioned that the car is tricky to drive. But, he was happy to see his drivers attack with fighting performance finally available to them after ten races. The Mercedes boss explained that Lewis was ten kmph through turn six and went ten kmph quicker into turn seven. Unfortunately, he lost control and failed to make it through the corner.

Moreover, Toto added that George had a similar situation. The Briton was on his delta time which has been his strength this season. But it went too far on Friday, resulting in a crash. Wolff concluded, “So whether there was wind or any other conditions. I think the summary is the car is tricky to drive. But it is faster now, and for me, that’s absolutely okay.”