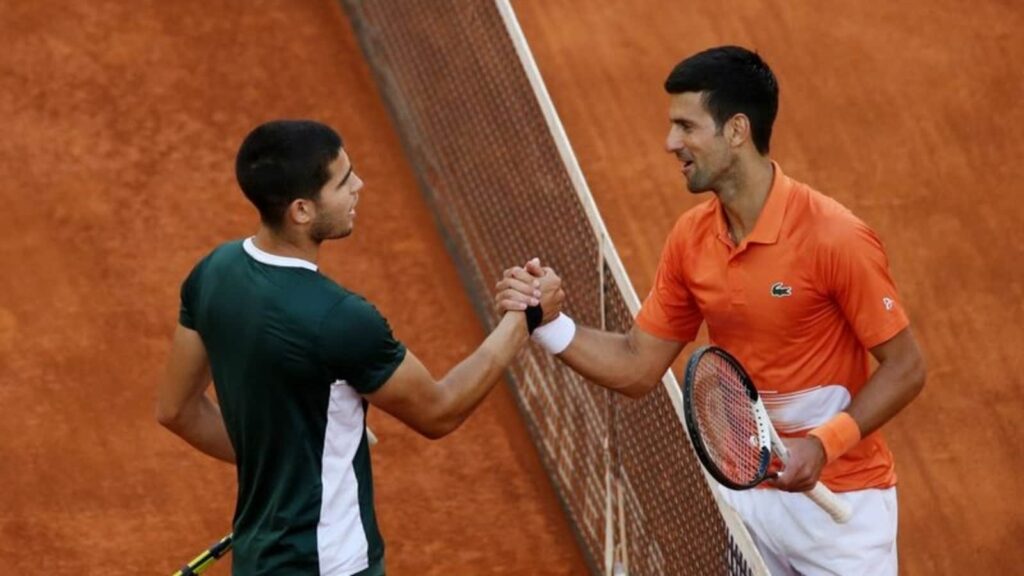 The biggest event of the clay season is in front of us as the top-tier tennis stars will gather in Paris to fight for a Grand Slam title at the Roland Garros. So far, Stefanos Tsitsipas, Carlos Alcaraz, and Novak Djokovic have lifted one Masters 1000 title each in this year’s clay-court tournaments. The Greek tennis star had the chance to win his second title of the season on Sunday against Novak Djokovic. However, the world no.1 was on top of his game. He defeated Stefanos by 6-0, 7-6(5) in a two straight sets finals match.

The 23-year-old was also the finalist at the French Open last year. But, Stefanos could hold onto his opening two sets to love advantage and eventually fell short against Djokovic at the end of five sets. After his defeat in Rome, Tsitsipas has mentioned Carlos Alcaraz and Novak Djokovic as the favorites to win in Paris ahead of 13-time champion Rafael Nadal, who is struggling with his chronic foot injury. Alcaraz won the back-to-back titles in Barcelona and Madrid. The 19-year-old defeated Rafael Nadal, Novak Djokovic, and Alexander Zverev in three consecutive days to win in Madrid.

The young Spaniard also became the first player to defeat Rafa and Nole in the same tournament on clay. Alcaraz and Djokovic had a fierce semi-final encounter in Madrid which lasted three hours and 35 minutes. However, the youngster kept his calm and ended up winning over the world no. 1 by 6-7, 7-7, and 7-6.

Who Will Win At The French Open?

Djokovic had a good run in Rome after losing three tournaments in Monte Carlo, Serbia, and Madrid. The Serb finally emerged as the victory, securing his first Masters title of the year at the Italian Open.

After his final defeat against Novak Djokovic, Stefanos shared that Carlos Alcaraz and Novak are the favorites to win the French Open. With the form they are in, the Greek has placed them above the rest of the competitors. Stefanos said that he would love to be at their level and challenge them. But, the 23-year-old feels that he needs to improve a couple of elements in his game before the Roland Garros.

Stefanos further stated that a major tournament is like a marathon that takes the most out of a player physically and spiritually on the court. The youngster feels that clay courts have the ability to squeeze every single part of a player. The Greek tennis star planned to rest for a few days and then start the practice again to get into the French Open mindset. He added, “I enjoy playing in Paris, and I’m hoping for a deep run.”

While Djokovic and Alcaraz may have the benefit of form, one cannot ignore the fighting spirit and the ability to play through pain that Rafael Nadal has. The Spaniard will look to get his 22nd title at the French Open. Meanwhile, Djokovic will look to equalize Rafa’s record of most Grand Slams.