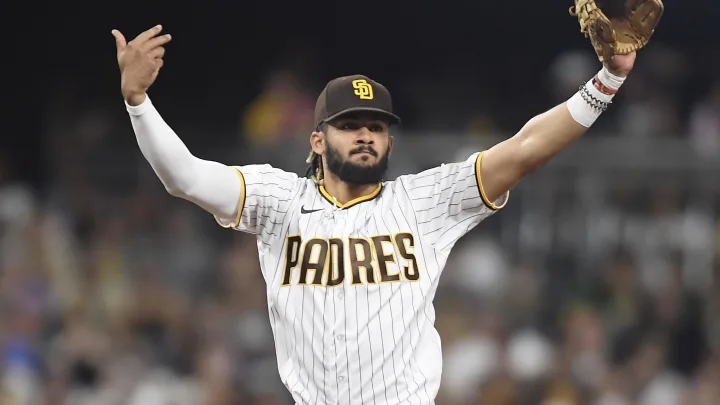 The New York Yankees have been linked to many rumored MLB names this offseason. So, any name at this point seems like a good option. That’s what we thought, Until the reports about the Yankees’ potential association with the San Diego Padres’ player Fernando Tatis Jr.

Are The Yankees In Pursuit Of Fernando Tatis?

Few names among active MLB players tend to bring up controversy as Fernando Tatis does. Major League Baseball suspended the young shortstop in 2022 for the violation of MLB’s drug use policy. But recently, shocking recent rumors have linked Fernando Tatis Jr with the New York Yankees. The rumors started when the 23-year-old shortstop was seen at the airport heading to New York City. This led many people to start brewing whispers that Tatis might be coming to meet the Yankees.

The Yankees, as we all know, are one of the clubs who are enhancing their squad over the summer. The Yankees are making every effort to look everywhere while building stronger muscles. Additionally, recent rumors indicated that the Yankees were advancing in their chase of the iconic MLB player. One of the famous names recently connected to the Yankees is Tatis.

As a few teams have sparked a fire with their acquisitions, the MLB winter meetings are becoming hotter. By re-signing the legendary Aaron Judge, the Yankees themselves made the news. Xander Bogaerts, an intriguing shortstop, was instead acquired by the Padres from the Boston Red Sox. Therefore, Tatis Jr.’s trade to the Yankees seemed to have a good chance of happening.

Tatis Jr. joining the Yankees would make a major statement, but it’s not impossible. Xander Bogaerts, who the Padres recently signed from the Boston Red Sox, might be traded rather than moved to another position on the field. Tatis will also be unable to play at the beginning of the 2023 season because of his ongoing suspension for using performance-enhancing substances. Fernando is recovering from surgery on his wrist and shoulder and will be able to play again around the middle of April.

When Will Tatis Become A Free Agent?

One of the longest contracts in sports history was inked by the talented shortstop with the Padres. Tatis had a 14-year contract. He will be eligible to sign an unrestricted free-agency contract when it expires in 2034. It might not be the final one for him, in contrast to many of these other huge contracts.

He will be 35 years old when Tatis’ contract end, which is not quite a retirement age. The All-Star shortstop may sign a new deal, but they are unlikely to. The Padres have a long-term contract with Tatis. But at present, his yearly pay is not excessive. As a result, the Yankees may find it to be a wise investment.

Also, read New York Yankees Looking To Unload Aaron Hicks! How Can They Do It?