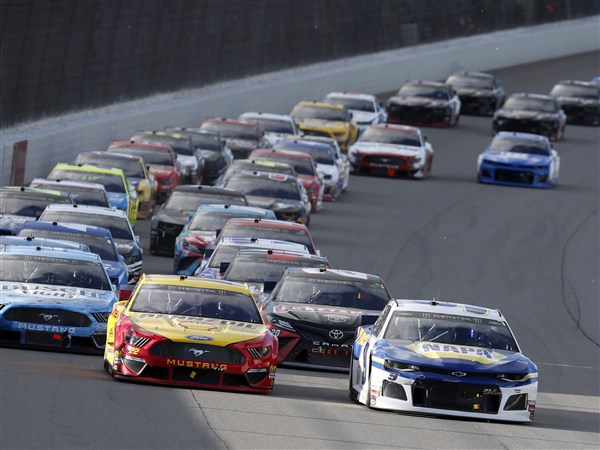 On Tuesday, NASCAR issued a couple of penalties and suspensions to two Cup Series racing teams after the DuraMAX Drydene 200 race at Dover Motor Speedway. The teams were penalized for violating Section 10.5.2.6 of the NASCAR regulations. The section penalizes teams for the loss or separation of an improperly installed wheel.

Further, Denny Hamlin‘s Joe Gibbs Racing team and AJ Allmendinger’s Kaulig Racing team were penalized for the loss of the wheel, which could prove to be dangerous for the drivers while racing on the track. Apparently, Hamlin lost the left front wheel of his Toyota Camry before coming out of the pit lane. Meanwhile, Allmendinger lost the right front wheel of his Chevrolet Camaro. The tyre issue led to Hamlin finishing 21st in the race while Allmendinger failed to finish the race in Dover.

The tyre loss at Dover Motor Speedway was the eighth occasion during the 2022 season when a team’s crew was suspended. Further, a NASCAR official revealed that Joe Gibbs Racing crew chief Chris Gabehart and crew members Derrrel Edwards and Blake Houston had been suspended for four races. Moreover, Kaulig’s Racing crew chief Matt Swiderski and members Jonathan Willard and Keiston France during the next four races.

Further, NASCAR’s representative also informed that Joe Gibbs Racing would appeal the penalties to Hamlin’s team. The suspended members in the penalty report would be allowed to contribute to the team while under appeal. Both teams will be forced to race without their crew chiefs for the next four races at Darlington Raceway, Kansas Speedway, Texas Motor Speedway, and the Charlotte Motor Speedway. The suspended crew members would be allowed to return on June 5 at Gateway Motorsports Park.

During the Xfinity Series, three crew members of Sam Mayer’s Jr Motorsports team have received a four-race suspension. Unfortunately, Mayer’s Chevrolet lost a wheel on Saturday during the A-Game 200.

The suspended crew members are crew chief Taylor Moyer, Orane Ossowski, and Markus Pierce-Brewster. They will miss the races in Darlington, Texas, Charlotte, and Portland. The crew members will be eligible to return on June 25 at Nashville Superspeedway. Further, the Kaulig Racing team’s crew chief Bruce Schlinker was fined $5000 for unproperly installed lugs in the post-race check.

Share. Facebook Twitter Pinterest LinkedIn Tumblr Email
Previous ArticleGunther Shares His Opinion About WWE Changing His Stage Name!
Next Article Miami Grand Prix: Rainfall Could Create More On-Track drama In The US, Parties Kick off In The City Ahead Of The Inaugural Race!