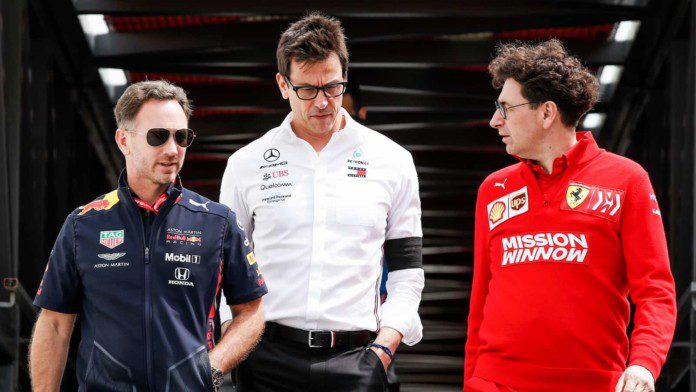 Volkswagen decided to enter Porsche and Audi in Formula 1 for the 2026 season earlier this year. Porsche is set to team up with Red bull to make their F1 debut, with the outfit leading the current constructors’ championship. Their star driver Max Verstappen is also leading the drivers’ championship and is the reigning world champion. On the other hand, Audi is still looking for a partner team. But, it seems like the progress for the 2026 engine has slowed down as the teams have not been able to agree on a formula for a new engine.

The lack of decisiveness has led to the speculations that Mercedes and Ferrari are using sneaky tactics to break Red Bull’s deal with Porsche. However, the Mercedes and Ferrari team principals, Toto Wolff and Mattia Binotto, have denied the allegations suggesting they have no benefit in delaying the regulations.

The Mercedes boss shared that they introduced the H(engine), which would have been tough to accommodate for the newcomers Porsche and Audi. Wolff added that the FIA was supposed to provide confirmation at the end of the year if the new teams would be joining the sport.

Wolff reckoned that the confirmation has not come yet, and he has no idea why. The former Austrian driver shared that regulations in F1 change all the time. He added, “So you can’t make it regulation dependent. It is something that we can expect from them also because we’ve made big steps towards them.” Toto insisted that his team would like new outfits to be a part of the show. The potential teams have been discussing the regulations for a while but have not committed yet.

The Ferrari team principal said his team is very positive as having more manufacturers would be great for F1. Mattia further reckoned that it would be great for his team to have the Volkswagen Audi group within their business and their F1 racing championship. He claimed that they had done everything they could to adapt and make sure the new outfits were happy.

The Italian engineer revealed that the teams removed the H to help the new teams joining F1. They removed H, despite the move not being the best choice for his team. Mattia believed it is a compromise for the budget cap as these technologies are highly effective and great for F1. He added, “So I think that overall again, we are very positive and constructive.”

The Ferrari boss mentioned that the FIA is leading the discussion. And some more time is required to do the right thing. He insisted that the new regulations are not ready for Porsche and Audi. Mattia concluded, “They’re still open points. And these open points simply need to be tackled, discussed, and agreed.”