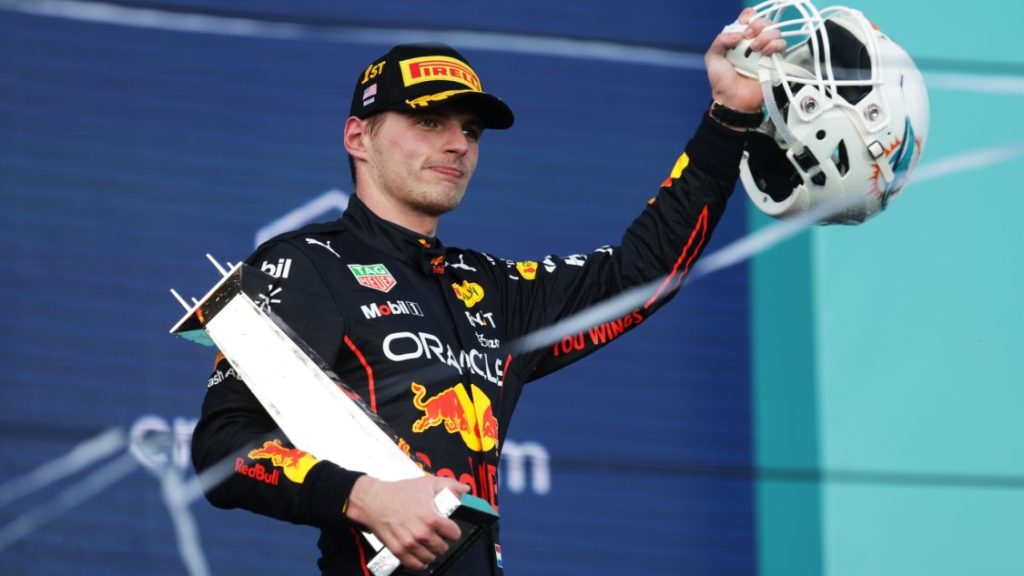 On Sunday, the reigning F1 champion Max Verstappen clinched victory against Ferrari’s Charles Leclerc during the inaugural Grand Prix in Miami. Verstappen started at the third position during Sunday’s race. However, the Ferrari driver finished on top, completing 57 laps in a record 1:34:24.258s and acquiring 26 crucial points. However, the Dutchman cruised ahead early to climb above to take the lead on the grid. Max has one in all three races that he has finished this season. The 24-year-old managed to reduce Leclerc’s drivers’ standings lead from 27 to 19 points. He also won the fastest lap to secure some bonus points for Red Bull.

Meanwhile, Charles Leclerc started on the pole position with his Ferrari teammate Carlos Sainz in the second position. However, Red Bull was clearly faster than the Scuderia, allowing Verstappen to lead for most of the race. Verstappen was cruising ahead when a collision between McLaren’s Lando Norris and AplhaTauri’s Pierre Gasly during the 41st lap triggered the safety car. The safety car period allowed Leclerc to close the gap on Max and get back on top with ten laps to go.

The Monegasque driver tried real hard to get close enough to the Dutchman to pass him. But, Verstappen did not allow Charles any opportunity to get past him and eventually finished the inaugural race first. During the final stages, the race got intense and dramatic, with Leclerc and Verstappen fighting to finish first. However, Max Verstappen got the lead, with Charles finishing 3.786 behind in second place. Moreover, Carlos Sainz finished third to secure the podium and keep Ferrari (157 points) ahead of Red Bull (151) in the constructors’ rankings.

The reigning world champ went ahead of second-positioned Sainz around the outside of Turn 1 and into the Turn 2. Then, Max chased down Leclerc and took the lead during the race’s early stages in the ninth lap. Verstappen kept his lead through the pit stops and seemed to be heading towards a comfortable victory with an eight-second lead. However, Charles Leclerc got another opportunity during the final few laps after the safety car procedure was triggered.

The Monacan driver managed to close the eight-second lead to just one second after the restart. But, Charles was still frustratingly far from Verstappen to make a move for the lead. In the end, Max Verstappen used Red Bull’s superior pace to increase his lead, restricting Leclerc from taking advantage of a one-second advantage by the DRS overtaking aid. The Dutchman finished the race on top, securing his second win in a row.

Although Max Verstappen had a tough time during the practice sessions, where he lost a lot of time. However, the reigning world champ came back stronger to win his third race of the season. And Dolphins NFL quarterback Dan Marino awarded the winner’s trophy to Max. The Red Bull driver said it was an incredible race for his team. Verstappen added, “It was very physical but I think we kept it exciting until the end.”

The inaugural Miami Grand Prix is an attempt by Formula One to set up its fanbase in America. The motor racing sport’s popularity drastically increased in the US after Netflix’s docu-series Drive To Survive. Sporting stars like Patrick Mahomes, LeBron James, and Michael Strahan were also present during the race. The Red Bull team principal, Christian Horner, said that the event was insanely huge, and the race turned out to be an exciting one until the end. Horner added, “I think it’s been great for the American public to tune into Formula One.”

Now, F1 drivers and racing teams will gather for the season’s sixth race, The Spanish Grand Prix, on May 22. So, stay connected with us to know all the details and updates about your favorite racers and the game.