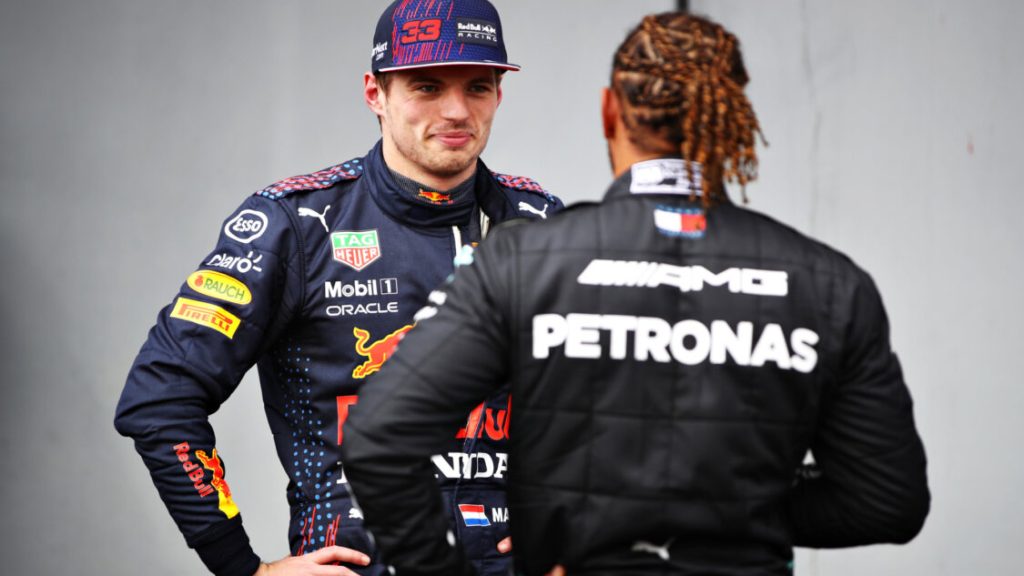 Lewis Hamilton and Max Verstappen are not a part of a fierce rivalry this year like in 2021, as Mercedes have struggled with their car. However, Hamilton would still remember the big upset he received from Verstappen during the final race in Abu Dhabi last year, costing the Briton his eighth championship title. The seven-time world champ has not won a single race this season with his team struggling to get their car right. However, Hamilton did have some success eventually during the ninth race in Canada.

Lewis in Montreal clinched his second podium of the season since the opening race in Bahrain, where he finished P3. Meanwhile, Max Verstappen won his sixth race of the season in Canada, with Carlos Sainz finishing second for Ferrari. The trio shared a funny moment as Hamilton jokingly took a dig at Verstappen during the post-race conference. The Mercedes driver made a comment that it would be hard for Max Verstappen to empathize with Mercedes’ porpoising issues as compared to Carlos Sainz.

Talking about his confidence for the British GP, Hamilton thought that Mercedes was better in medium and high-speed corners. However, the 37-year-old pointed out that the Silver Arrows still have bounced. So, he was unsure how his W13 would react going through Copse and other crucial places on a track that has four long straights. Lewis added, “Max doesn’t know what I’m talking about. But Carlos knows what I’m saying.”

Hence, Hamilton believes that the British weekend would be an interesting one for Mercedes. The British driver was excited to return to the UK. He commented that the UK’s weather is incredible and hoped it would remain the same next week. Meanwhile, Verstappen quickly reacted to Hamilton’s hilarious comments and enacted the bouncing effect during the conference.

Hamilton Talks About Mercedes’ Setup During The Canadian GP

Lewis Hamilton and Mercedes reached Montreal with an experimental approach on Friday. The Silver Arrows introduced a new floor-stay in Lewis’ car while Russell went for a more conventional setup. However, the part did not work out, and Lewis found himself driving a W13 which was causing even more problems. The team eventually made crucial changes in the setup, resulting in a P4 start and a P3 finish for Hamilton while his teammate George finished P4. However, the Briton revealed that despite improvements in pace, the cars’ bouncing refuses to go away no matter what the team has tried so far.

Hamilton told that his car’s balance on Friday was neutral and positive, with no rear-end issue. However, as soon as he applied, even a degree of turning the rear end started to come around. Hence, the former world champ was left fighting to keep his car out of the walls and could not finish his long run. He added that the car had become undrivable at that point in the setup window Mercedes was experimenting with.

Lewis further shared that it was an experiment that did not work out. So, the Silver Arrows made some changes which gave out much better balance, a nicer amount of understeer, better traction, and no snaps. He concluded, “So,it was night and day difference, We still have bouncing that’s not going away.”

The two Mercedes drivers managed to match the pace of the frontrunners in phases during the race in Montreal. However, the German racing team would be unsure about how their car would react to a more conventional and faster track than the street circuits in Monaco, Baku, and Canada.

Share. Facebook Twitter Pinterest LinkedIn Tumblr Email
Previous ArticleSergio Perez’s Struggling Weekend In Montreal Comes To An End After An Early Retirement At The Candian Grand Prix!
Next Article Ferrari’s Charles Leclerc Optimistic About His Chances In The 2022 F1 Championship Despite Recent Setbacks!