Lewis Hamilton, the seven-time world champion, was not sure if the whole team would allow him to wear the t-shirt with the lines, "Black Lives Matter," back in 2020 after the police brutality that snatched away the life of George Floyd.
By Arnab BoseJanuary 25, 2023Updated:January 25, 20233 Mins Read
Facebook Twitter Pinterest LinkedIn Tumblr Email 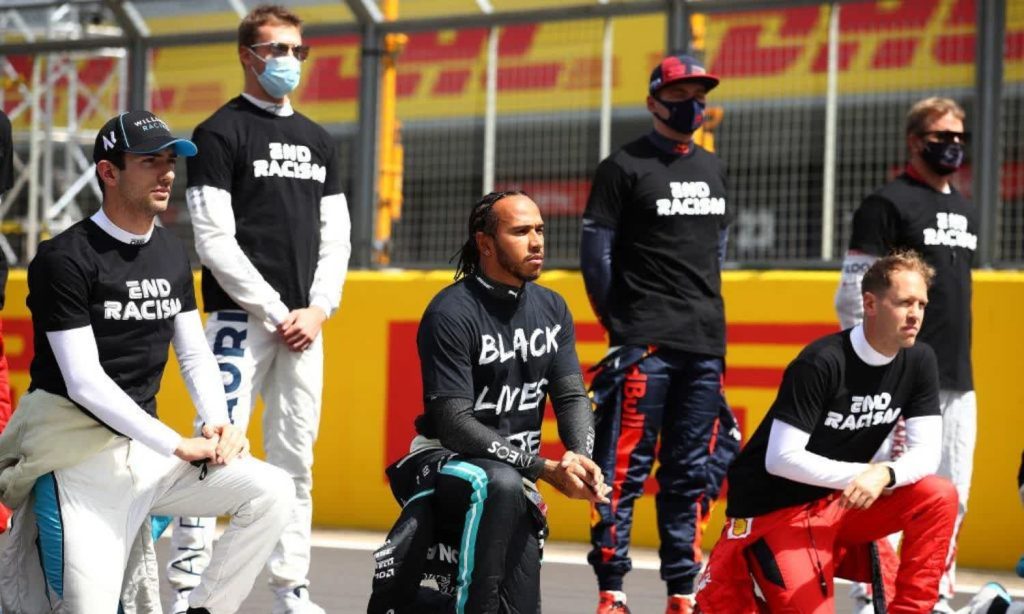 In the interview podcast with Jay Shetty on his podcast, On Purpose, Lewis Hamilton revealed some of the most well-kept secrets of his life. And one of them also comprised his team, Mercedes. According to Hamilton, he was a bit apprehensive about telling his teammates his idea of wearing a different t-shirt than he was supposed to, to support the Black Lives Matter protest.

After the murder of George Floyd, every driver in F1 Motorsport was supposed to wear a t-shirt with the lines “End Racism” and kneel as a gesture marking protest. But Lewis Hamilton wore a different t-shirt with another saying, a little bit more specific to the point, “Black Lives Matter.” He felt others on the team would not get how important it was for him to wear that t-shirt. However, Lewis did not say anything to his teammates and hid his t-shirt till the last minute. Hamilton prevented himself from getting stopped, so he wore that dress below another shirt.

According to Lewis Hamilton, they used different slogans, like “End Racism” and “We race as one,” but it did not sound right to him. The great Briton felt this was about something else. This movement was about more than just equality. Instead, lives were at stake here. In the same interview, Hamilton spoke out about his traumatic days at school. And the transition from racism at school to racism at the race track.

Lewis Hamilton further mentioned, “I realized that racism is everywhere. You cannot escape it. Even in the place where you think you will find solace.” The Briton goes on to talk about the importance of his foundations like Mission 44 and Ignite. And How he decided to be this flag-bearer of the fight against racism.

How The Team Reacted To Lewis Hamilton’s Idea Of The BLM Shirt?

The Mercedes driver also mentioned what his team told him after his action, saying, “team’s reaction was like only if I had told them my plan they could have prepared better.” But in his defense, Lewis claimed that he was very afraid about how the team would react. And since they have been really very supportive regarding such delicate matters, Hamilton was not much stressed about it.

Lewis Hamilton agrees that he kept the secret. Due to this the rest of his team was a bit caught off-guard. But when he went down on his knees, his fellow drivers like Sebastian Vettel and Lando Norris supported him. Hamilton has always been very vocal about fighting against racial abuse. Every weekend he campaigns against racism. Generally, he has always received support from his fellow drivers.

However, the FIA has introduced some new rules regarding any form of protest on political, religious, and other relatable issues. This rule strictly prohibits any driver from campaigning on the race track against any such matter. All the drivers will need to take proper permission from the governing body if they want to convey any sort of social message. Obviously, this law has not sat down too well with Lewis Hamilton.