“LeBron James Is So Fu****g Easy To Play, He Ain’t Got No Moves,” Says Former Bulls Power Forward Dennis Rodman! 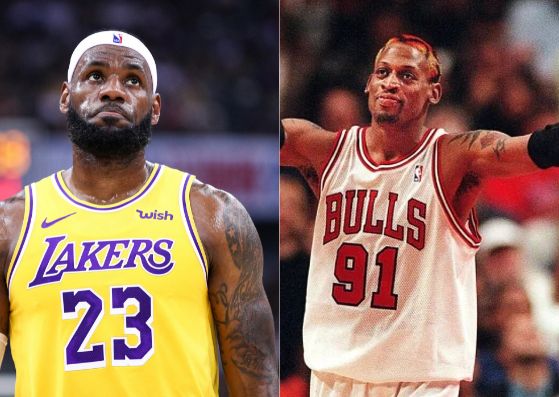 LeBron James is known for his tough play as he is not afraid of making contact. He is a big man with a height of 6 feet 9 inches, weighing 250 lbs. Thus, all attack is not a bad game plan for James. It is nearly impossible to stop him across the court without physical contact. However, the King is often mistaken to have a sole strategy to score points which may not be true. James has found ways time and again to keep scoring in a career that has spanned 19 seasons. While LeBron might have had a simple game plan at the start of his career, NBA fans have witnessed his evolution from a scoring standpoint to a multi-dimensional player.

Dennis Rodman once claimed that LeBron James was confident of his defensive abilities to hold off the King. The former Chicago legend shared his perspective on guarding James. Rodman claimed it would be easy to defend the Lakers superstar due to his limited moves. The two-time NBA All-Star won five championship titles throughout his career. He is also considered one of the greatest defenders in the NBA.

It looks like the sixty-year-old is not exactly the biggest fan of James’ game. Dennis once gave way to controversy after choosing Kobe Bryant over LeBron James. He attacked the King for missing games due to load management and then claimed that LeBron was an easy player to defend.

The former NBA champ claimed that LeBron is so “f*****g easy to play because he does not have any moves. Rodman commented that Scottie Pippen would take James’ “f*****g a** down quick even before Dennis got to him. The two-time NBA defensive player of the year added, “His game is too simple. He’s just big.”

Further, Rodman is considered one of the most elite defenders to have played in the league. Hence, there could be some grain of truth in his claims. However, The Worm is known for his competitive approach. Thus, Rodman’s comments may have come from a competitive mindset instead of an analytical approach.

However, Dennis may not have been aware of the fact that James has developed a multifaceted scoring approach over the years. LeBron also tried to rely on his jump shots more often during his last season at the Cavaliers, which could have seemed to be a uni-directional game plan. However, the King can pull off impactful moves from deep pseudo-stepback threes to pot fadeaways.

Whether Rodman’s point is true or not, James has found ways to score time and again throughout his career. He is the all-time leading scorer across the regular season and playoffs combined. LeBron James also averaged 30+ points per game during a disappointing run for the Lakers. He almost won the scoring total at the age of 37 in a season where LA failed to make it to the playoffs.