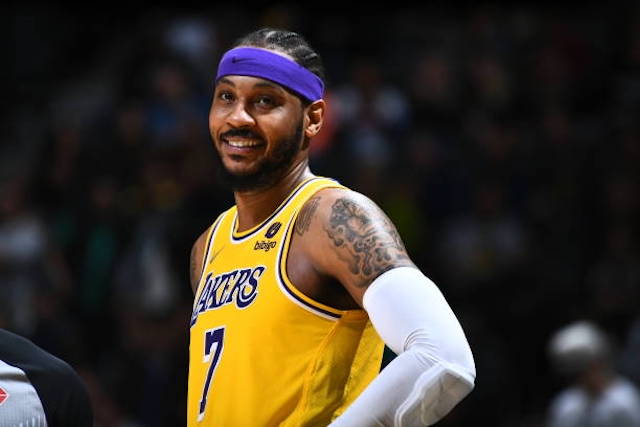 Seeing the attacking duo of LeBron James and Carmelo Anthony dominating others teams in the NBA was a sight of Joy for the Lakers. Meanwhile, there is a whole other interesting story about how LeBron James convinced Anthony to join the purple and gold. Carmelo had opened up about the conversation he and King James had before he joined the Lakers.

The high school rivalry between LeBron James and Carmelo Anthony was compared to that between Larry Bird and Magic Johnson. But once James saw greater success than Melo in the NBA, things started to shift. Despite this, LeBron didn’t think twice before calling his pal and asking for assistance.

A while ago, Melo was featured in a podcast called Million Dollars Worth of Games. During his conversation on the podcast, he revealed how he came to play for Los Angeles. He said all it took was a straight phone call from James. According to Anthony, LeBron suiting his persona, made him a no-nonsense call and directly told him, “Yo, I need you.” Anthony said he wasn’t expecting LeBron to call him, even though they have been discussing playing together for a year.

Carmelo Anthony noted that since his son will attend high school there, joining the New York Knicks was a viable possibility for him. But after that call, circumstances changed. On paper, it appeared to be a strong squad at the time. James, Anthony, and Russell Westbrook are all likely candidates for the Hall of Fame. Therefore their club could compete with any other team. Unfortunately, the reverse took place. The roster’s age was evident. Melo missed out on sharing a victory with his good friend LeBron James.

Where Is Carmelo Anthony Going Next?

One of the most well-known names on the free agency list is Carmelo Anthony. At this stage of his career, his contributions are well recognized, and clients are still interested in his offerings. Lately, the Suns, Heat, Bucks, Nuggets, Knicks, and even Nets have acquired about the potential Carmelo trade. The connection between title contenders and the Knicks is clear.

The Nets were noted as being among the top suitors for 10-time All-Star veteran Carmelo earlier in September, according to Brandon “Scoop B” Robinson of Bally Sports. The insider, however, is now claiming that the Nets have slowed down their pursuit of the former Lakers forward in a stunning turn of events. Thus, it is a bit unclear at this point where Carmelo Anthony might head next.

Also Read Why LeBron James Slipped Down From The Latest Top 5 NBA Rankings? Fans And Experts Are Furious