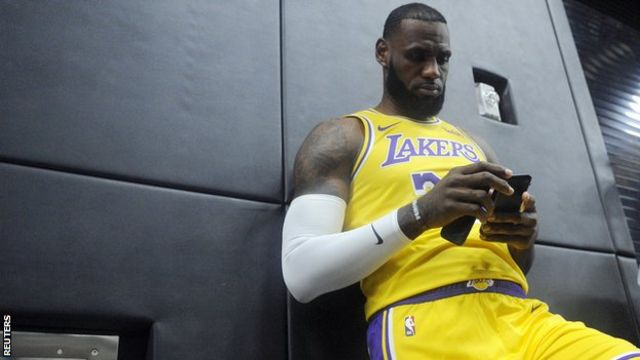 LeBron James recently aced the list of the top 100 highest-paid athletes globally. The Los Angles Lakers superstar earned $126.9 between June 2021 to May 2022. The four-time NBA champion replaced MMA fighter Conor McGregor to become the highest-paid athlete in all sports. However, a recent revelation from Kevin Love during an interview has raised an issue about LeBron James’ frugality. Loves and James played together from 2014 tp 2018 for the Cleveland Cavaliers. Along with Kyrie Irving, the duo led the franchise to their maiden championship in 2016.

While talking to Taylor Rooks, Kevin revealed a big secret about James and claimed that the highest-paid athlete in the world is one of the most frugal personalities he has come across. The Cavs forward said that LeBron James does not like to use his mobile data. The 37-year-old always looks for WiFi to use the Internet and avoids paying service charges.

The five-time NBA All-Star shared that LeBron avoids using his mobile data as much as he can. James does not like to pay for his service and prefers connecting to a WiFi whenever he gets a chance. Love shared his experience from the past road games against the raptors when James was in Cleveland. Kevin told that he had seen LeBron a million times in Toronto. The 2016 NBA champ added, “They talk about wealth and all that, like sometimes it’s the things you don’t see.”

Love mentioned that LeBron did not use any data on his phone when they landed in Toronto, went through the customs, and drove from the airport to the hotel. He would wait for the WiFi and avoid using the roaming services. Kevin Love used to get frustrated sometimes and told LeBron, “C’mon Bron, like, Seriously? It’s WiFi.”

Further, Kevin said that getting away from the phone for a minute is good. But, he was unsure about James not using the data at all. This is not the first time James has been described as “being cheap.” But, the 37-year-olds uncanny ways have made him a fortune, and King James does mind getting criticized for his unique way.