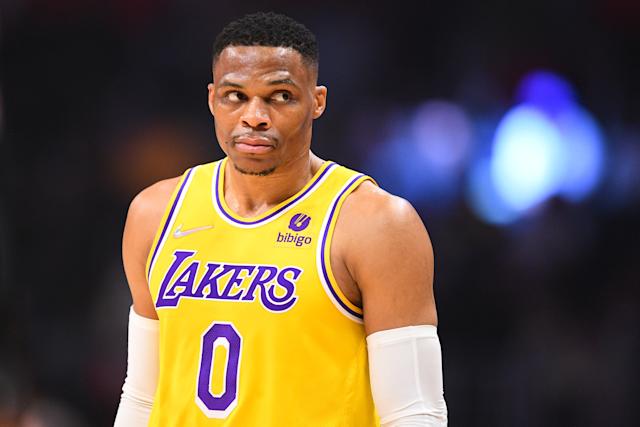 The LA Lakers considered Russell Westbrook a promising prospect for their team when they acquired him last summer. While the Lakers are struggling to get back on track with 30 wins and 41 losses, the inconsistency in Westbrook’s play has earned him a lot of negative attention from the LA media and the Lakers fans.

Sadly, for the Lakers, the constant criticism has affected his game for the worse. His season average of 17.9 per game is the lowest since his rookie year in the NBA. Russell had to comprise with fewer shots when he joined the Lakers with LeBron and Anthony in the team. Unfortunately, Westbrook has not been able to make the best of the shots that he has taken. He is shooting 27.7% of his shots from three and 43.2% from the field this year. However, the missed layups and rim finishes have cost him a lot of points. Fans are losing their minds that Russell would be making $44 million this year for his performance. NBA Expert at Yahoo Sports believes that constant criticism has led to a disappointing run for Westbrook this year.

Westbrook is known for his confident play. However, it seems like all the confidence somehow vanished due to the constant criticism and pressure of being in a major media market. Being a native of LA has not helped Westbrook with the hard time that he is getting from the Lakers fans. He has received on-court altercations from the fans. Russell had to make a public statement to the Lakers fans earlier this month for heckling him and his family.

As per Chris Haynes, Westbrook is not used to the media exposure that a player gets when they play for teams like the Lakers and in the shadow of giants like LeBron James. It is a completely different experience when a player plays for teams like Washington, Houston, or OKC.

Chris added that Westbrook’s mistakes have been overly scrutinized in a major media market. Haynes told that the little shortcomings get overlooked while winning 50 games. However, the same amount of mistakes could be highly visible while playing for a champ team like the LA Lakers during a below-par season.

The incidences have also led to the rumors that Russell Westbrook might be considering moving on from the Lakers next season. The love that a player expects from their fans always boosts their confidence and encourages them to do better. Russell’s deteriorating performance suggests that the constant criticism is certainly affecting his game.