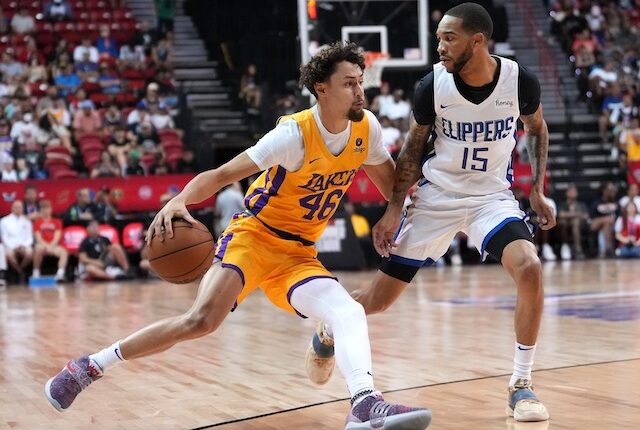 On Sunday, the Los Angeles Lakers announced the signing of their two Summer league team players, Javante McCoy and Fabian White Jr. Now, the Lakers roster has one last spot left as the franchise aims to change its fortunes during the next season. LA was speculated to be in talks with experienced forward Carmelo Anthony for a possible second stint with the team. However, the Lakers seem to have gone in an opposite direction with their recent announcements. As they signed a bunch of players who were above 30 years of age.

The media criticized them for taking on so many aged players as there seemed to be a lack of energy and young blood on the floor. The lack of young players did affect the Lakers when LeBron James and Anthony Davis were sidelined due to injuries while Russell Westbrook had a tough run. The recent decision to sign five-year experience college players suggests that the Lakers are thinking of starting young blood on their last roster spot.

Both the players have signed an Exhibit 10 contract which would span for one season, with no guarantee and a minimum salary. The contract does not come under the salary cap. Moreover, McCoy and White Jr. would be fighting for the final roster spot during the training camp, scheduled to kick off in October. However, if the move did not work out, the two undrafted players from the NBA 2022 Draft would have to play for the Lakers’ G team. McCoy and White will join Cole Swider, Scotty Pippen Jr., and possibly Max Christie, who was LA’s second-round pick.

White Jr. played five matches for the Lakers Summer League team, averaging 3.6 points per game and shooting 43.8% from the field. He made six three-point attempts and scored two of them. He also played five seasons of college basketball with Houston. Fabian played 148 games, averaging 8.3 points and 4.7 rebounds. The 23-year-old was also selected for the 2021-22 All-ACC First team. The 6’8″ forward also won the ACC Tournament MVP and played a key role in Houston’s Elite Eight progress during the 2022 NCAAM basketball tournament.