Is Carlos Alcaraz The Best Tennis Player In The World Right Now? Will The Young Spaniard Idol Nadal’s Successor? 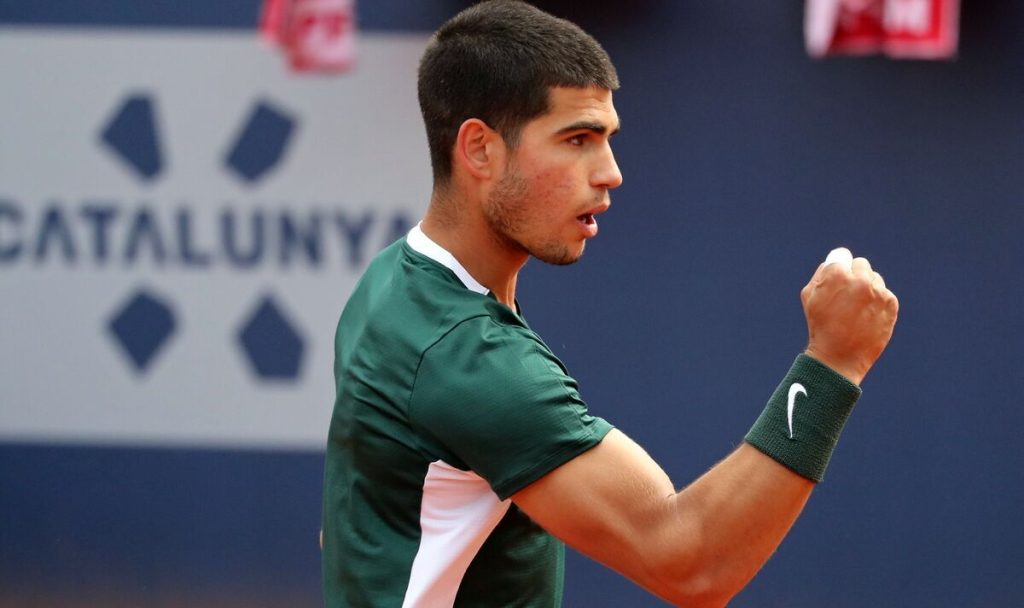 Two days after Carlos Alcaraz turned 19, the teenager Spaniard became the first player to defeat Rafael Nadal and Novak Djokovic on clay in the same tournament. Alcaraz went on to the finals defeating Djokovic in the Semi finals. He lost the first set and then made a strong comeback to win the game. The young Spaniard clinched the final two sets, 7-5, 7-6, against the world no. 1. Further, Carlos lifted his second Masters 1000 title at the Madrid Open.

Alcaraz made his Madrid Open last year when he was ranked 120th in the ATP tennis standings. In a matter of 12 months, Alcaraz has emerged as the most impressive sensation in men’s tennis. After winning at the Madrid Open in two straight sets, Alcaraz has climbed up to a career-best sixth spot in the ATP rankings. Last September, Carlos became the youngest tennis player to appear in the US Open quarterfinals. Then, the Spaniard went on to win his first Masters Crown in April. Only his inspiration Rafa has won two similar titles at a younger age.

After getting enough time on clay and winning a title, Carlos has pulled out from Rome Open. He will rest his sore ankle and get completely ready for the Roland Garros later in May. On Sunday, the young Spaniard said that this week had been the best one of his life. He beat Rafael Nadal first in the quarter finals. Then, Alcaraz went on to win the semi-finals against Novak Djokovic. In two consecutive matches, the 19-year-old beat the 21-time Grand Slam champ and the world no. 1. While Federer is sidelined right now, Carlos could become a real threat to the big Three’s legacy with his quick rise to greatness.

Alcaraz Looks Up To Rafael Nadal

The young Spaniard admired the 21-time Grand Slam champ the most. Carlos revealed that he looks up to Rafa. He has grown up watching all of Nadal’s big achievements and matches. The young tennis star shared that he learned a lot from his idol.

Nadal also shared his opinion about his fellow Spaniard. Rafa pointed out that Alcaraz is young. And he had no doubts that all younger things are more exciting than older things. The 35-year-old stated that a new car or a new phone looks much better than the old ones. Nadal added, “It’s something that It’s normal in this life. I can’t complain at all about it.”

Top Tennis Stars Send High Praises To Alcaraz. Is He The Best In The World Currently?

Alexander Zverev was defeated in the finals by Carlos Alcaraz in the Madrid Open. He entered the finals after beating Stefanos Tsitsipas on the same day. The German tennis player described Alcaraz as the best player in the world right now.

Evidently, Alcaraz has been sensational in 2022. He has won the (most) four singles titles on ATP tours, with the highest 28 wins this year. Zverev believes that Carlos Alcaraz is a new superstar and will win many Grand Slams. The German also predicted that the 19-year-old could someday be the world’s number one player.

Further, Stefanos Tsitsipas is another prospect to take over from the Big Three. The 23-year-old was the runner-up at the French Open in 2021. The Greek tennis player is inspired by Alcaraz and wants to become a player like the young Spaniard. Stefanos acknowledged that Carlos is at a pretty early stage of his career. But the Greek thinks Alcaraz has the potential of becoming a big player in a very short time. Tsitsipas wants to get to the young Spaniard’s level right now. Stefanos added, “I think he’s one of the best players in the world.”

However, it will take a lot from young Alcaraz, who is fairly new to the tennis world. And the new challenges throughout a player’s career. He is far from taking over the Big Three. But his strong game suggests that he might be preordained for greatness.

Alcaraz Talks About His Long Journey Ahead

Born in 2003, Alcaraz was just two months old when Roger Federer won his first major title at Wimbledon. Moreover, Carlos Alcaraz is coached by Juan Carlos Ferrero. The Spanish coach is a former world no. 1 and won the French Open in 2003. Talking about the scope of improvements, Carlos said he has good shots, but they could be better.