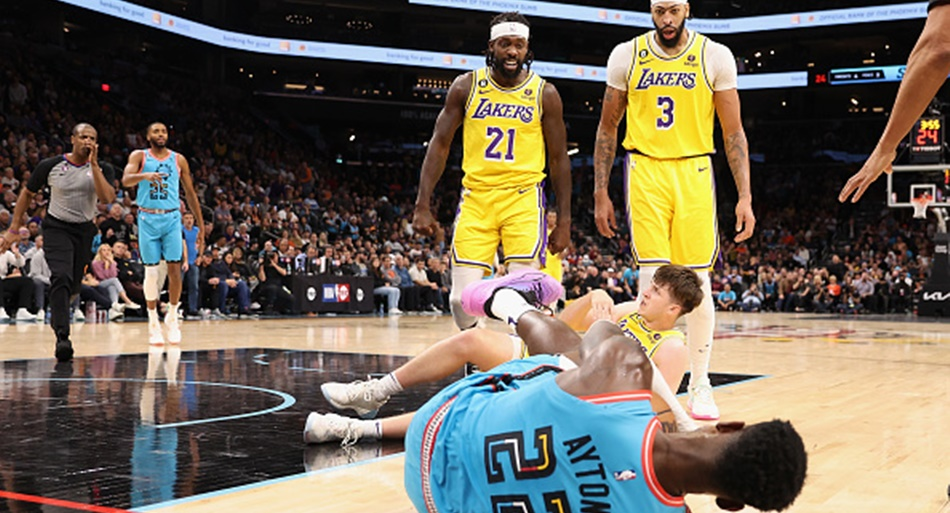 Tuesday night’s Lakers vs. Suns was one hell of a game. However, it has been in the headlines for different reasons than that. During the fourth quarter of the game, Lakers point guard Patrick Beverley was ejected from the game for pushing DeAndre Ayton from behind. He did so because Ayton was standing over Beverley’s fallen teammate Austin Reaves.

Beverley’s action from Tuesday night has divided opinions and received all sorts of reactions. However, Lakers man Austin Reaves has defended Patrick’s choice saying he would have done the same.

The Los Angeles Lakers Vs. The Phoenix Suns game on Tuesday started as a regular basketball match and went on like an intense one. But towards the end, they turned into a full-blown faceoff between the two teams. As a result, officials had to intervene to cool things down.

It all started when a Laker’s young gun Austin Reaves fell on the ground after Devin Booker hit him in the face. It was followed by Booker and DeAndre Ayton coming over to him and taunting him standing. That’s when point guard Patrick Beverley decided he had had enough of it. Pat came charging from behind and pushed DeAndre to the ground. Soon after, Ayton was stopped by Anthony Davis when he tried to go after Beverley. But luckily, things cooled down after the official came between the two teams’ players. This incident caused Beverley to be ejected from the game.

However, Patrick’s actions have dived into the basketball world, with some saying what he did was wrong and unsportsmanlike. On the other side, there are also people who are appreciating Patrick for standing up for his teammate, including Skip Bayless.

Meanwhile, now, the man who was at the center of it all has given voiced what he feels about the incident. Los Angeles Lakers star Austin Reaves has addressed the tussle between Beverley and DeAndre. Austin has kind words for his teammate Patrick Beverley. He said that he did not think what Patrick did was wrong in any way. He went on to say that he loves Patrick for having his back and that he would have done the same for him in a similar situation.

Even Patrick Beverley does not have much remorse about the incident. During the post-game media interaction, he revealed that he thinks what happened was unprofessional. However, he is a “big fan” of standing up for his teammates.

Over the past few years, the rivalry between the Phoenix Suns and Los Angeles Lakers has gotten more fierce and nasty. Also, Beverley has a personal connection to Phoenix. The Lakers might have lost the game but will surely remember the incident and look for the payback whenever the two teams play against each other next time.