How Fruitful Is The PSG Extention For Kylian Mbappe In Comparison With Lionel Messi & Cristiano Ronaldo! 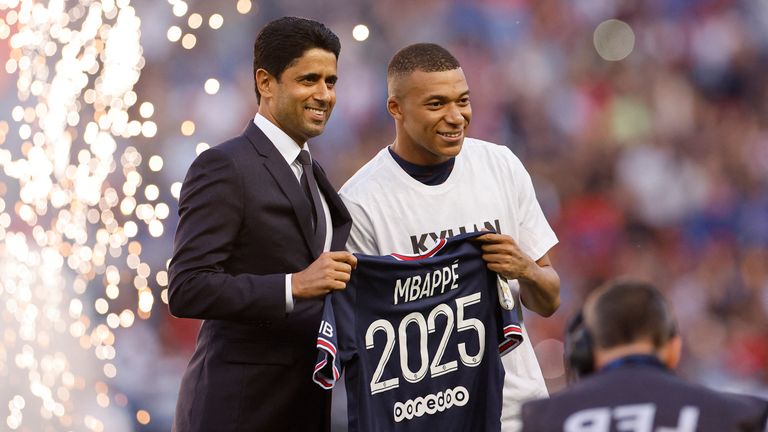 Recently, Kylian Mbappe signed a contract extension with Paris-Saint Germany, making him one of the highest-paid athletes in football. The 23-year-old signed a three-year contract extension which will keep him in Paris until 2025. As a result, Kylian had decided against his most-awaited transfer to Real Madrid. Many people expected Mbappe to take a free transfer this summer after admitting last year that he would join the Spanish football club in 2022.

Last year, PSG rejected a huge transfer deal from Los Blancos for the French forward. His contract with the French Club was supposed to expire on June 30. Last week, Kylian announced that his decision would come in a few days. He had been in a verbal agreement to join Madrid this year. Moreover, the PSG forward also suggested his move to the Spanish capital in a recent interview. However, eventually, the deal did not go through, and Mbappe chose to stay in Paris following a lucrative deal.

The extension deal made the Frenchman the highest-earning footballer currently. Mbappe would get £42.5million (€50m) on top of a £153million (€180m) bonus for staying with the French club. Moreover, he will have 100% control of his image rights too.

Kylian’s contract may not be the highest in football history. Lionel Messi was offered a £64million (€75m) annual salary during his final seasons for Barcelona. However, the Argentinian international’s salary was reduced this year to £25.5million (€30m). Messi’s salary will increase during the final year of his deal at the Parc des Princes. In addition, claims suggest that Messi has made over €1,000m in his career, which is more than any player in football history.

Meanwhile, Cristiano Ronaldo made £34million (€40m) per year at Juventus with favorable Italian tax laws. However, his salary was reduced to £25.5million (€30m) this season with Manchester United. In addition, Kareem Benzema at Real Madrid earns £11.2million (€13.2m) per season. While Eden Hazard and Gareth Bale get paid more than Benzema, the French footballer has never asked for a salary hike since his arrival at Los Blancos in 2009.

However, Ronaldo is the highest-paid football player in terms of sponsorships. Nike pays the 37-year-old £15.3million per year (€18m), while Messi and Neymar get the same amount from Adidas and Puma. Mbappe has an £11.9million (€14m) agreement with Nike, which he signed in 2019, for the whole decade. The 23-year-old also secured a number of goal bonuses which raised his Nike earnings to £17million (€20m). Thus, the youngster has a long and enriching career ahead of him, and he could emerge as a modern football legend in the future.