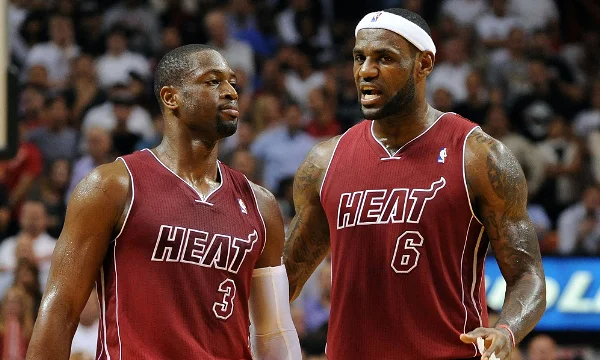 After playing eight seasons with the Cavs and not winning a single NBA Championship, it was time for LeBron James to move on. His walk away became one of the most fierce rat races in the NBA to recruit the best free agent of the time. Eventually, James became a part of the Miami Heat. The swap agreement transferring LeBron James to the Miami Heat surprised everyone, including Dwyane Wade. And as history knows, Dwyane & LeBron were not in each other’s good books. However, recent reports claim that they were on the verge of killing each other. But why was that? Keep reading to find out.

Dwyane Wade And LeBron James “Tried to Kill Each Other”

In 2010, LeBron James joined the Miami Heat, giving the franchise its big three of Chris Bosh, Dwyane Wade, and LBJ. With one of the league’s most fearsome trios, the Heat appeared untouchable. They won two NBA championships while making four straight finals. In a four-year period, they were the team to beat. While the club did provide spectators with many exciting scoring opportunities, its defense stood out as the crowning achievement. The crew traveled to the Florida Air Force Base for a training camp during their first summer together. They were a brand-new team and were coming at each other with full heat. David Fizdale, a Lakers assistant coach, made the startling admission.

Fizdale reflected on how it was the finest training camp he had ever attended during a talk with Brian Windhorst. He disclosed that their only attention was on defense. David mentioned, “Dwyane Wade and LeBron James tried to kill each other. Every day was a war, and all we worked on was our defense. Our offense was so far behind the rest of the game.” Talking about the training camp, Fizdale also added, “That training camp was a big part of us winning titles later. It was the best training camp I’ve ever been a part of.”

Despite being one of the greatest teams of all time, LeBron James and Wade were not without conflict during practice. The Florida-based team reached the Finals each of the four years that we witnessed James, Wade, and Bosh play together on the court. With 224 victories throughout the regular season and two titles.

At the time, The Heat was the most successful franchise in the whole league. After the San Antonio Spurs soundly defeated Miami, the period ended. Many basketball fans across the world were shocked by Bron’s controversial choice. Not even D-Wade could accept the same. Wade and Bosh were never the same after that, and LeBron returned to Cleveland Cavaliers.