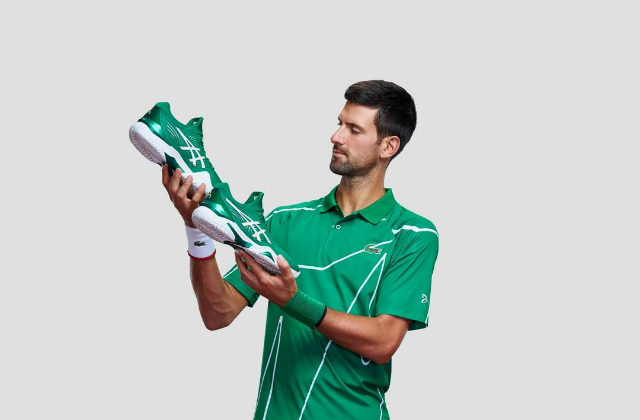 The 20-time Grand Slam champ Novak Djokovic is prepping to revive his 2022 campaign at the Monte Carlo this week. Since February, he has been out of action after facing a quarter-final defeat in Dubai. After his deportation from Australia, Novak could not feature at the Indian Wells Masters and Miami Open due to the vaccination mandate in the US. The Serbian tennis giant is all set to play at the Monte Carlos as he prepares for the clay tournaments at the Rolland Garros and Wimbledon.

Equipment plays a major role in the sport of tennis as it crucially affects a player’s performance. And Djokovic keenly pays attention to detail in order to get an edge against his competitors on the court. Djokovic is very careful about his shoes, and he works closely with the scientists at his shoe brand ASICS to make sure he has the right equipment to compete on various surfaces. Each of the surfaces like grass, clay, and hard court offers different sets of challenges, which makes it tough for the tennis players to win consistently.

However, the Serb’s outstanding record over the years is a product of his preparations and making sure his equipment is perfect for the challenge. The Brand Trainer at ASICS, Marc Sieber, recently revealed that Djokovic helps the brand design the shoes in order to gain any kind of advantage on the court. Novak is also the Global Footwear Partner of ASICS and has a footwear line in his name.

How Does Djokovic Help In Making The Right Shoe At ASICS?

Speaking to Tennisnet.com, Sieber revealed that Djokovic is involved in the designing process of the shoes. Nole highlights their importance to his game. Marc told that the involvement of top athletes like Djokovic works wonders in creating the new models of shoes. Novak closely works with the company’s Insitute of Sports Science in Kobe, Japan. He stays in constant contact with the experts and provides them with all kinds of inputs they need.

The 34-year-old is currently training to play at the Monte Carlo Masters as he prepares for The French Open. He will look to gain some form and win some tournaments ahead of Roland Garros and Wimbledon. Djokovic was denied entry to the US after being deported from Australia due to his stance on Covid 19 vaccination. Luckily, the vaccination mandate in France has been removed, and he will be able to play all the French tournaments.

Novak’s brother Djordje revealed that Djokovic landed in Belgrade ahead of the Monaco tournament, scheduled to begin on Saturday. Last week, Nole also shared a practice video on Twitter. He was seen working on his game ahead of the clay season. Djordje said that Novak would compete at the Monte Carlo and Roland Garros.

Last year, he won the French Open and will look to lift his third title at the Roland Garros this year. Djokovic’s brother hopes that the World No. 1 will continue to play great games as he restarts his 2022 campaign. Djordje added, “Until the last moment, he did not know if he would be able to play. But fortunately, he will appear in Paris, Rome, London, and Madrid.”

Moreover, Djokovic is the favorite to win at the Monte Carlo and the Roland Garros this season. His top rivals like Nadal, Federer, and Medvedev are out due to injuries. Hence, he might just have the perfect opportunity to win his 21st Grand Slam title and equalize Nadal’s record at the French Open in May.