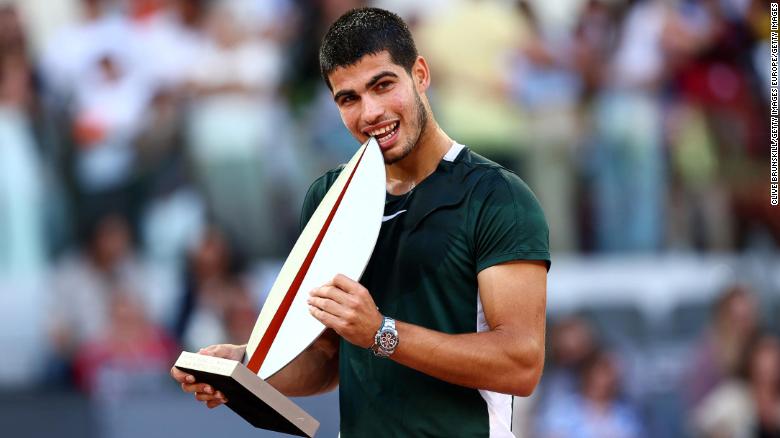 Carlos Alcaraz has been going through a brilliant run of form over the last 12 months. The 19-year-old climbed from 120th rank in the ATP rankings to a world no. 6 in just one year. The young Spaniard has emerged to be the most-talented player during the 2022 season, and many experts have already started to compare him with his idol Rafael Nadal. Last week, Alcaraz lifted his second ATP title at the Madrid Open after defeating Rafael Nadal and Novak Djokovic in the same claycourt tournament. The teenager became the first player to achieve the feat and has received praise from experts worldwide.

Recently, Paul Annacone has claimed that Carlos might be the greatest player the tennis world has witnessed since Nadal. The former American tennis player has coached the likes of Roger Federer, Pete Sampras, Stan Wawrinka, and Sloane Stephens. Speaking to Tennis Channel, the 59-year-old claimed that the tennis world had not seen such a meteoric rise since Rafael Nadal. Paul said that beating Rafa and Djokovic back-to-back just does not happen, and the youngster pulled it off comfortably. Further, Annacone added, “We weren’t sure if we’d seen it again. But this kid is something special and he ahs done an amazing job.”

Paul also talked about Alcaraz’s chances of winning the French Open. He is considered to be among the favorites to win the tournament. However, the American coach feels that while Alcaraz has got the talent and temperament, it would be very challenging for the teenager to win at a major tournament with best-of-5-set matches.

Alcaraz will be in a completely different environment at the French Open. He will compete against the best of the world, which would be completely different from the Masters tournaments. Talking about Carlos’ winning chances, Annacone said that the youngster has the talent and the skills to win. However, Paul acknowledged that the teenager had not been exposed to the majors’ environment before, and it could prove to be very challenging. The American coach feels that Carlos will be dealing with a different landscape over two weeks at the French Open. But, Annacone does not see any reason why Alcaraz cannot win with the level of skills that the youngster has.

Further, Paul stressed the fact that beating Nadal on clay during the best-of-5-set matches could be the toughest challenge the young Spaniard will face. Annacone told that the hardest thing for Carlos would be winning three out of five sets against the 21-time Grand Slam champ, who has won 13 titles in the French Open. Moreover, Federer’s former coach believes that Carlos Alcaraz could hurt his opponents in different ways. And there is no reason why he could not be successful at the Roland Garros at such a young age.

Moreover, Paul Annacone talked about Carlos Alcaraz’s matured mental game, which is so much better than players of his age. Paul pointed out that Alcaraz makes very few mental errors. There are not a lot of errors in his shot-making as often seen in teenagers. Annacone feels that Alcaraz is mentally ready, and his physical, strategic, and tactical skills make him a strong contender to win at the French Open.