Can Bronny James Make It To The Lakers Before His Father LeBron James Retires? 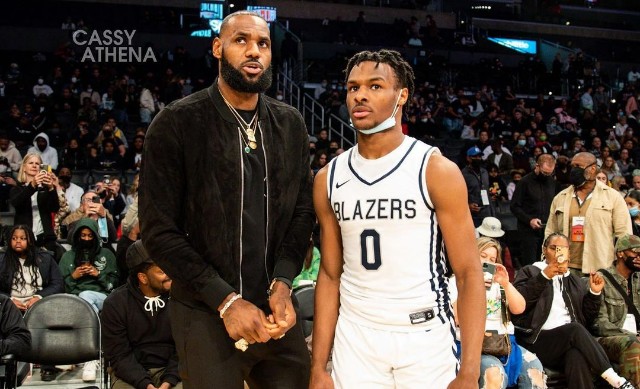 LeBron James has admitted on several occasions that he would love to play with his son Bronny before retiring from the NBA. Luckily for the King, the apple has not fallen far from the tree, unlike other star kids who succumbed to their father’s legacy. Bronny has proved this year that he would not be another side kid who will give in to the pressure of filling their fathers’ shoes and fail to break into the world’s greatest basketball league.

While Bronny may not be as tall as his father‘s 6’8” height, the 17-year-old is a four-star rated player in the 2023 high school batch. Bronny is 6’2″ inches tall and ranked 30th among young NBA stars in America as per Rivals.com. Moreover, James’ son is ranked no. 52 by 247 Sports. He is ranked sixth as a combo guard in the country and remarked as the fourth best player in California. Bronny may not have had the similar physical attributes as his father when he was 17, but the youngster seems to be more skillful than LeBron was at the same age. Moreover, having a coach like LeBron James, who has seen it all in the NBA, has certainly helped Bronny become a great player during his school career.

LeBron’s Son Aiming To Enter NBA As The 2024 Draft

Bronny James is following in his father’s footsteps as he aims to make it to the league after high school, just like LeBron James. However, the 17-year-old’s high school career took a huge toll due to the pandemic and injuries. During his sophomore year, the high school basketball season was cut short due to COVID-19.

Unfortunately, Bronny suffered a meniscus tear, which sidelined him from the court the same year. Later, Bronny entered his junior year at Sierra Canyon in 2022. He was ranked no. 40 in the list of ESPN’s Top-100 Seniors. Moreover, the two 2021 Rookies, Zaire Williams and BJ Boston, also played with Bronny as seniors. They appreciated the youngster on how he handles pressure in tense situations. William also claimed that Bronny had taught him how to deal with the pressure from the media.

So far, Bronny has proved that he aims to become a great player like his father and is here to stay. The young blood will become eligible to enter the NBA Draft in 2024. It seems like Bronny is focused on making his father’s dream come true. The 17-year-old will most likely enter the league after high school and might end up playing with his father before the 37-year-old hangs his boots.