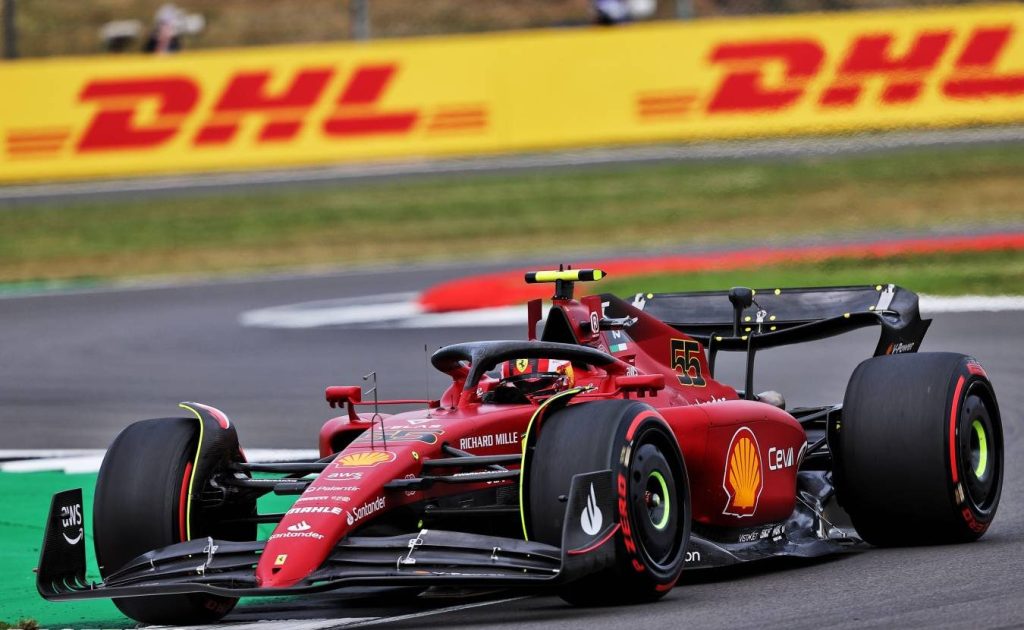 On Sunday, Carlos Sainz Jr. won his first F1 Grand Prix during his 150th start in Silverstone. But it turned out to be the most dramatic race of the 2022 championship. The Ferrari driver finished the 52-lap race in 2:17:50:311s, followed by Sergio Perez and Lewis Hamilton, finishing P2 and P3, respectively. A late safety car due to Esteban Ocon’s retirement during the final few laps of the British Grand Prix leveled the grid with both Ferrari drivers in front of Hamilton.

The Scuderia ordered Sainz to hold off the train of drivers during the restart and let Charles Leclerc take the lead. However, being on a set of new soft tyres, the Spaniard decided to defy team orders and went on to win the British Grand Prix. The safety car also allowed Perez to get back on the podium after dropping P16 on the grid. This happened due to an unplanned pitstop to change his damaged front wing after early contact with Charles Leclerc.

The race started with a dramatic moment when three drivers, including Zhou Gyanyu, George Russell, and Alex Albon, retired during the opening race. Russell made contact with Zhou which led to his Alpha Romeo car turning upside down. The car hit the barriers and then flipped over to the Sir Lewis Hamilton grandstand wall. The horrific incident led to a 45-minute stoppage as Zhou was taken to the hospital. Later, the FIA revealed that the Chinese driver was fine and had not suffered any severe injuries. Eventually, the British Grand Prix restarted with qualifying grid positions again.

Hamilton Gets His Third Podium While Mercedes Face Their First DNF

Lewis Hamilton created history as he showed some challenging racing on his home circuit on Sunday. Meanwhile, Mercedes faced an early retirement when George Russell made contact with Zhou. The younger Briton stopped after the incident and could not restart his engine. He received outside support from the stewards to get his car back to the pits. Although his W13 was not severely damaged, the FIA did not allow Russell to get back into the competition as he received outside assistance.

Moreover, Hamilton continued on as he seemed competitive since the start of the race. When the race started, Hamilton progressed early from P5 to P3. But the restart from the original grid position led to the Briton falling behind Lando Norris to fifth again. However, the seven-time world champion kept fighting and had an 18-second lead over the two Ferrari drivers during the British Grand Prix.

Eventually, a second restart after Esteban Ocon’s retirement left Hamilton struggling to compete at the front. Perez attacked well and got ahead of Hamilton to P3 with Sainz and Leclerc in the lead. Eventually, Checo and Hamilton managed to get ahead of Leclerc, whose car suffered from a broken front wing, and his tires were also old at the moment. Thus, an immaculate performance in Silverstone helped Lewis secure his 13th podium in Silverstone, the most by any driver at any venue.

Verstappen Finishes P7 After Falling Back From The Lead

Elsewhere, Red Bull’s Max Verstappen had another horrific race in Silverstone after he was forced to retire during the opening lap last year. This time, Verstappen had a great start as he went ahead of Sainz before the first stoppage to take the lead. Sainz was heard saying on his radio that Max had more pace. However, Verstappen suffered a puncture as he complained about driving over a carbon piece.

The reigning world champ had to rush back to the pit with his wobbling RB18 to get his tyres changed. But, the issues continued for the Dutchman as his car posed another issue with the floor, affecting his pace. After that, Verstappen could not get back to the front for the whole race and had to fight with Mick Schumacher for P7 until the very end. However, Max managed to ward off the Haas driver, who finished P8 and secured his first points at British Grand Prix after over 30 starts.

Elsewhere, Leclerc finished fourth as his team strategy cost him a better finish yet again. And Fernando Alonso finished P5 for Alpine after getting ahead of Lando Norris, who ended at P6 in his home race. Moreover, Vettel and Magnussen took P9, and P10, respectively. On the other hand, six drivers, including Esteban Ocon, Pierre Gasly, and Valterri Bottas, were also forced to retire due to mechanical issues during the course of the race in Silverstone. Formula One will now return to Austria during the upcoming weekend. There, Red Bull will be the favorite to win at their home circuit on July 10.