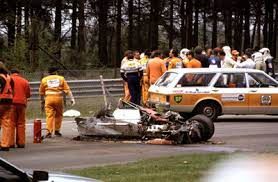 Unquestionably, one of the most thrilling sports to watch is Formula 1. The risk, though, is always present and hides beneath the display of speed. Even for seasoned professionals, driving and maintaining control of a supercar that can reach 200 mph can be difficult. However, there is always a chance of mishaps and injuries. Over the years, Formula One drivers have learned how to tame these obstinate horses. There are hardly many collisions in Formula One. But over the years, there have been some truly terrible F1 collisions. So, we’re talking about the worst wrecks in Formula One history.

Although they were no longer partners, Prost and Senna were the two top Formula 1 drivers in 1990. However, Ayrton Senna held a 9-point lead going into the Japanese championship race. It guaranteed that the Brazilian would take home his second championship if Prost didn’t finish. Senna, on the other hand, continued to boil even after 1989.

Prost began the race ahead of the McLaren driver off the line, as was to be expected. However, an unexpected occurrence happened as the group descended into Turn 1. Senna failed to stop for the first bend, which was necessary to navigate it effectively and impaled himself on the Ferrari’s side pod. That gave Ayrton his retribution in the most dramatic way by sending them both flying into the sand pit and out of the competition.

In the 1970s, the Nürburgring circuit was considered to be among the most hazardous. The race was called off because it was raining just before it. One of the drivers that voted to stop the race from taking place was Niki Lauda. But the race went forward as planned since most drivers approved it. When the rain stopped, most drivers pitted after the opening lap to switch to dry tires. Lauda’s vehicle had just gotten around a left kink on the second lap. As he reached the straightaway, his automobile suddenly swerved to the right and hit the wall square in the face.

He was unable to escape alone after his automobile caught fire. Fortunately, a couple of motorists could assist him in escaping the flames. Lauda went into a coma after sustaining serious burns to his body. Fortunately, Lauda returned from the collision and started competing six weeks later. Before his career ended, he not only returned to Formula One but also took home two titles. Despite coming after one of the greatest F1 accidents in history, it was a stunning recovery.

Ronnie Peterson experienced a lot of terrible incidents at the 1978 Italian Grand Prix. He had to start with an outdated model because his first vehicle, a Lotus 79, was destroyed during the practice session. Additionally, Peterson had a bad start and had a few mechanical issues with the race.

Peterson’s car collided with the barriers as he attempted to return to the circuit, setting them on fire. Doctors discovered 27 fractures in his severely broken legs. Peterson’s wounds, however, went beyond some straightforward fractures. He was identified as having renal failure and an embolism of fat. Finally, he died away on September 11.

The 1982 Belgian Grand Prix, when Gilles Villeneuve lost his life, will live in infamy for Formula One fans. Eight minutes remained in the final qualifying session when the Canadian driver for Ferrari was on track. He then tried to approach Jochen Mass, moving along at a slower pace.

After beating off Mercedes drivers Sir Stirling Moss and Juan Manuel Fangio for the lead, two-time Formula 1 winner Alberto Ascari aimed to win the coveted Monaco Grand Prix. But as he got closer to the finish line, his automobile smashed through the barrier and into the Bay of Hercules.

Fortunately, he could swim out of the water and just fractured his nose. He did not sustain any serious wounds. It’s thought that the crowd’s startled response to Moss’s withdrawal on the 80th lap led to this strange collision. However, Ascari lost his life four days later due to a testing crash.

Also, read Lewis Hamilton Set To Have Power Grid Penalty By FIA After The Alonso Crash!