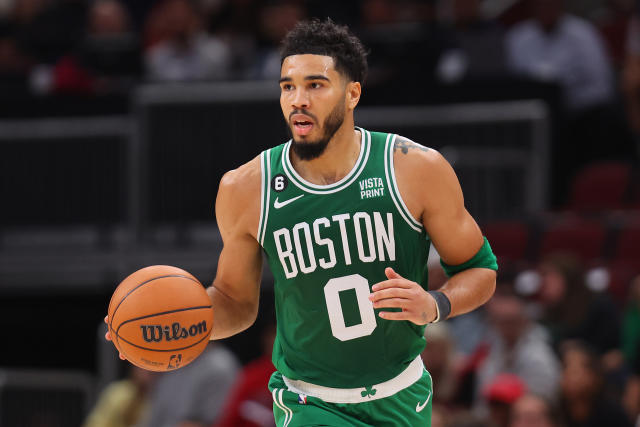 For the majority of the 2022 NBA season, Boston Celtics have proved why they are a force to be reckoned with. The Table toppers of the Eastern Conference clashed against the Miami heat on November 30. In a thrilling game, the Celtics topped the Heat by 134-121. With this victory, the Celtics now have a winning streak of five games in a row. Meanwhile, one of the biggest reasons for Boston’s success this season, Jayson Tatum, showed his magic last night and absolutely rattled Miami’s defense, scoring 49 points. The sheer dominance that Tatum exhibited last night has amplified the season’s MVP buzz for him.

Fans were up for a thrilling game of basketball on the night of November 30 when the Boston Celtics played against the Miami Heat. However, what followed can only be termed as ‘Tatum Tornedo’. Jayson Tatum of the Boston Celtics was the star of th game thanks to his stunning 49 points performance last night.

With several of the Miami players scoring in the double digits, it could have been a really close game. But Celtics’ forward had plans of his own. The 24-year-old Missouri native was on a roll last night, and the Crown Prince of England witnessed it firsthand.

It is not the first time Tatum has excelled for his team. Tatum had at least 30 points in each of his previous four games before this one on Wednesday. Having won 14 of their previous 15, the Celtics are the league’s hottest team. His consistent performance for his team this season has placed him right at the center of MVP debates this season.

After getting cold feet on the big stage of the last season’s final, Jayson has made a strong comeback. Now, he seems more determined than ever. Tatum has received more acclaim this season after quickly demonstrating tremendous progress. Throughout this season, Tatum has unquestionably been a player to watch.

According to ESPN’s Stephen A. Smith, Tatum has shown a noticeable increase in influence and output, so perhaps he deserves to be mentioned in the MVP discussion as well. When reviewing the game on television, Smith declared that he wanted to officially nominate Tatum for the MVP award for this season.

Moreover, after Tatum’s enthralling display of skills, even the future king of England couldn’t stop himself from praising the young star. Prince William, who was present to see the Celtics play the Heat, was astounded by Jayson’s captivating performance. William, the prince of Wales, said, “He’s very good,” following Tatum’s successful 3-point attempt.