Erik ten Hag Issues A Fitness Warning To Ronaldo For Missing Pre-Season! When Will CR7 Come Out Of Bench? 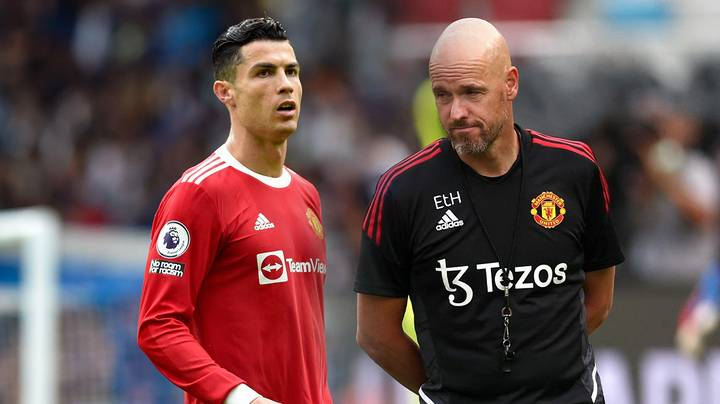 It looks like Manchester United is finally gaining some momentum as they move ahead in the Premier League. And the latest win against Arsenal will help the team’s cause. However, the team manager Erik Ten Hag, who aims to be Ronaldo’s teacher and friend, has warned CR7 about his fitness as he missed almost all of the pre-season for ManU. What is the issue? Keep reading to find out.

Manchester United’s performance and form have improved over the past few games. However, their star player Cristiano Ronaldo is still not a constant member of the playing squad since the summer window. As per the reports, Ronaldo was in full mood to leave Manchester United and join another FC for Champions League football. But things did work out, and he had to stay. Meanwhile, Erik ten Hag, ManU’s manager, recently revealed the reason why Ronaldo was not starting. He shared that the Portuguese striker did miss out on his pre-season and now that he needs to work a little more on his fitness level.

Ronaldo spent most of the offseason rumored to be leaving Old Trafford. But now, after leaving his star forward out of the starting lineup for the team’s last three games, the Dutchman has spoken about the need to manage the player. Ten Hag has said that he doubts the 37-year-physical old’s condition. Talking to the press, Ten Hag insisted, “I will be his friend. Sometimes I will be his teacher. It depends on the situation. As we all know, he didn’t have the pre-season and you can not miss the pre-season it’s a base. Especially the game we play, the way of play is not the type in comparison with last year.”

This Premier League season has not been very successful for the Red Devils. The team has recently begun to turn the round, as Erik Ten Hag has helped the group surprisingly find its rhythm. They lost to Arsenal in their most recent encounter on Sunday. All three points went to the Red Devils thanks to goals from Marcus Rashford and Antony, who scored on his debut. Now it will be up to the squad to keep becoming better. Manchester United sought to break Arsenal’s perfect Premier League record going into their meeting against the Gunners.

Bukayo Saka’s shot got through Lisandro Martinez’s knees and past David De Gea as Arsenal battled to tie the score. However, a brace from Rashford gave ten Hag’s team yet another victory, bringing their deficit over Arsenal at the top of the Premier League standings down to just three points. After a disastrous start to the season, United significantly improved with Ten Hag’s clear vision.