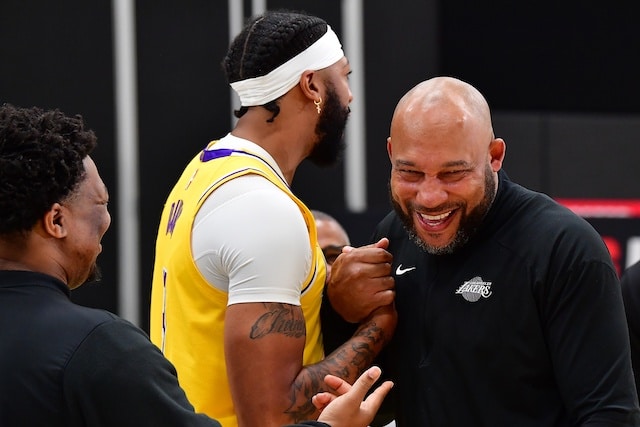 Anthony Davis is one of the most important players on the Lakers’ side. It was evident that the Lakers’ suffered in the last season as Davis was struggling with injury concerns. Meanwhile, at the start of the 2022 season, Davis was again struggling with poor form, and it was clearly reflected in the team’s performance. However, Now, Anthony Davis has now started to regain his groove. The star showed his dominance on Friday, scoring 38 points as the Lakers defeated the Pistons.

What Did Darvin Ham Say About Anthony Davis?

The Lakers have already won two straight games twice this season. The Purple and Gold triumphed over the Pistons following their victory over the Nets. While everything was going on, Anthony Davis, who led the Lakers to their fourth victory of the season, dominated the Pistons, scoring 38 points and grabbing 16 rebounds in the process. The 29-year-old forward loved serving as the Lakers’ solo captain as LeBron James was unable to play due to a left adductor issue.

Meanwhile, Lakers Head coach Darvin talked about Anthony Davis’ return to form after the game. Ham was happy to witness AD’s aggressive play and 21 free throws. Ham claimed that the squad benefits from Anthony’s presence alone. Anthony has consistently been a strong force for us, and today was no exception. Darvin Ham argues that when James returns, AD must continue to be the driving force. He claims that Davis must start playing well if the team is to succeed. The entire locker room is aware of this.

Ham went on to say that he is aware of how important it is for Anthony to perform like that and get the team rolling. The team’s best chance of victory is when Anthony Davis is performing like this. Everyone in the locker room is aware of this. Davis averages 34.5 minutes per game this season, 24.3 points, 11.2 rebounds, and 2.5 assists.

In the past few games, Davis has started to play more aggressively. When he shares the court with James and Westbrook, both of whom are incredibly ball-dominant, he prefers to adopt a passive position. However, as the Lakers’ recent games have shown, wonderful things happen when they funnel the ball inside to Anthony Davis.

The Lakers are now receiving the version of Davis that assisted them in winning the 2020 championship after two unsuccessful and injury-plagued seasons. Only time will tell if he can keep up this type of performance with a completely healthy roster. The Lakers could still have a good number of victories ahead of them if he succeeds, though.