Casemiro Is Excited To Reunite With Christiano Ronaldo At Manchester United! 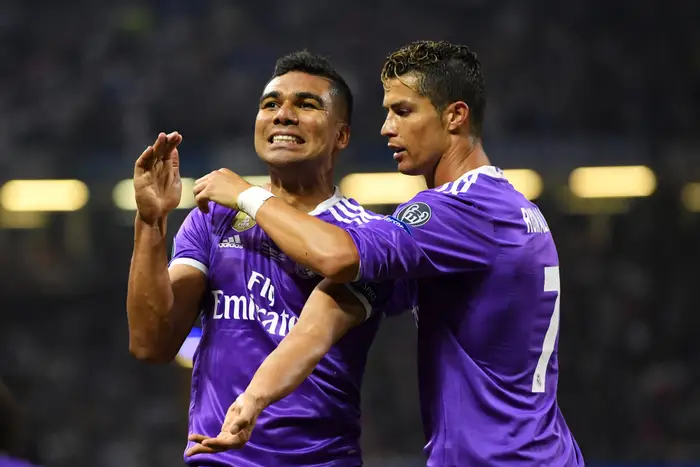 The Brazilian midfielder Casemiro is leaving Spain after a good stint there in search of a new challenge in English soccer. With the Brazilian now finalizing a £70 million transfer to Old Trafford, Casemiro admits he is thrilled about the idea of reconnecting with former Real Madrid teammate Cristiano Ronaldo. After nine fruitful seasons at Santiago Bernabeu, which included more than 300 matches and 18 championships, this decision was taken.

As of now, Ronaldo, 37, hasn’t received any offers from premier league clubs and is still willing to leave United following their poor start to the new campaign. It is clear that United is making every effort to appease the legendary Portuguese player by signing Casemiro, Ronnie’s former Real teammate, who will don the No. 18 for his new club.

During a news conference on Monday morning, Casemiro said a tearful goodbye to Real Madrid and was questioned about Ronaldo’s predicament at United. He praised the great Portuguese performer. While bidding his Madrid teammates a tearful farewell on Monday. He was asked about a possible reunion with Ronaldo at Old Trafford.

In a conversation with the press, Casemiro said, “I haven’t spoken to Cristiano. I hope he stays because he’s one of the best players of all time.” He may now be destined to remain in Manchester after clubs like Chelsea, Bayern Munich. And Atletico Madrid passed down the opportunity to sign him. Meanwhile, Casemiro responded to those who think his move to Old Trafford is motivated by money. He said that if that were the case, he would have left Real long ago.

Why Is Casemiro leaving Real Madrid?

Since 2013, the 30-year-old midfielder from Brazil has been a member of the Blancos. However, Casemiro has denied any claims that his departure is motivated by money. With nothing more than a fresh start being sought after, exceeding all of his expectations in Spain.

Casemiro gave the following justifications for breaking off his relationship with Real: “It’s always crucial when you make a huge decision in your life. After Real Madrid’s Champions League victory, I informed my agent that I believed my Real Madrid career was ending. I felt the same way following the holidays. I couldn’t be happier, and I believe history was made.” Casemiro also stated that he is looking for new challenges in his career and new goals to pursue. He also thinks that trying a different culture and club might help as he has won anything there yet. And that he is hopeful about the future.