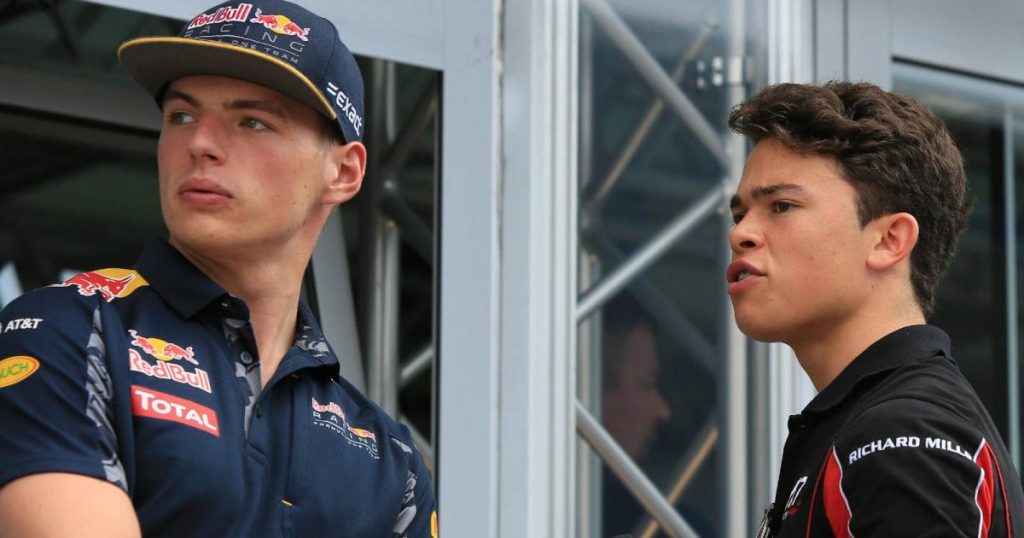 The Italian Grand Prix turned out to be a grand event for rookie Nyck De Vries. With his debut at Monza as a substitute for Alex Albon, de Vries scored an astonishing ninth position for the team. Consequently, as per the current scenario, it would be no time when De Vries will join the fraternity as a regular Formula One driver. The Dutchman is reportedly in talks with many of the outfits to join them as the F1 driver in the foreseeable future. And one of those outfits is the Driver’s Champion team, Red Bull. So, are they planning to partner up Nyck de Vries with their jewel Max Verstappen? Then what will happen to Sergio Perez? Keep reading to find out.

Currently, de Vries is negotiating with three major Formula One outfits, including Alpha Tauri, Williams & Alpine. And recently, the Dutchman confirmed that he met with Red Bull motorsport consultant Helmut Marko last Friday in Austria. On the Dutch talk show ‘Humberto op Zaterdag,’ the rookie driver stated, “I don’t know if I’m in such a luxurious situation that I can choose. It’s largely out of my control.” Apparently, Nyck de Vries has been in talks with Williams for some time to join them as their regular Formula One driver. However, with the emergence of Red Bull & Alpine, things have turned more surprising for the Dutchman.

Now the question comes is, will Nyck de Vries choose his motivation Max Verstappen and join Red Bull? However, the Austrian team already extended Sergio Perez’s contract for 2024 this year itself. So, what does the future holds for Checo?

As per the reports, de Vries had a meeting with Red Bull’s chief advisor Helmut Marko as Red Bull is utterly impressed by the rookie driver’s recent performance at the Italian Grand Prix. And now, they are considering him to join the team as a Formula One driver for their junior team, Alpha Tauri. Although not a long ago, Red Bull has been hovering over the possibility of enclosing IndyCar driver Colton Herta. But according to the current scenario, that situation has fallen through, and now Nyck de Vries is Red Bull’s main target for their sister team.

Nyck de Vries’ last-minute entry at the Italian Grand Prix was immensely in favor of the Williams team. His amazing performance in the qualifying and then ninth position finish in the main race proved that the Dutchman has some potential to join Formula One. And the same is said by none other than the seven-time World Champion Lewis Hamilton as well. As Hamilton stated, “I haven’t seen his qualifying performance but Nyck is a very talented driver”.

The Briton also emphasized that de Vries is a valuable team member. And he also works a lot of work on the simulator. Not only that, Hamilton distinctly stated that de Vries deserves a place in Formula One. “I’ve known him since he was really young. When I was at McLaren, my dad was trying to help him get into Formula One. And I hope today’s been good for him,” the Mercedes driver added.