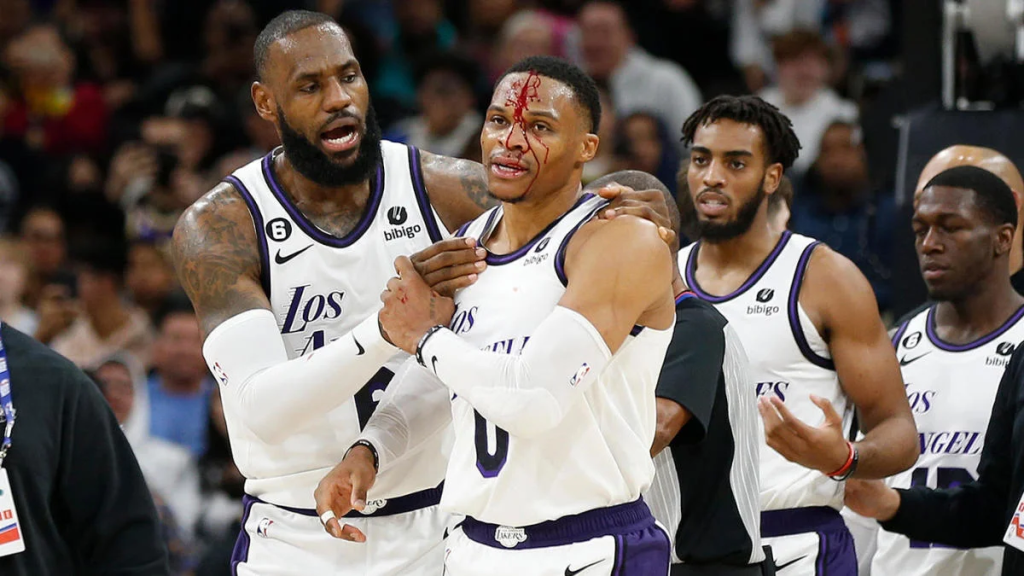 The Los Angeles Lakers are back on winning terms in the last few games. Even the most speculated return of LeBron James also did not affect the Lakers’ game. LA won their last game on Sunday against San Antonio Spurs with a score line of 143-138 on the night. On the night of return, King scored a massive 39 points to lead his team to victory in the absence of Anthony Davis. The massive scoring that James put up also looked like revenge for his teammate Russell Westbrook. The reserved point guard suffered a bleeding head injury during the game. Keep reading to figure it out.

With only a few minutes to play in the third quarter of the game, Zach Collins of the Spurs busted Westbrook’s forehead wide open. The 33-year-old got coved with blood instantly after getting hit. Seemingly the nine-time All-star took a hit in the process of grabbing the rebound to attempt a layup. After enduring the foul, Russell took it upon himself to revenge the foul committed on him. However, LeBron James was there to pull his teammate back to give him the necessary treatment. Later, the medical team attended to the injured and bleeding Westbrook.

Zach was immediately ejected from the court after the foul, and Westbrook also got whistled because of his reaction. Meanwhile, LeBron James was angry and expressed his anger by scoring 39 points for his team. In the post-match interviews, LeBron told everyone that he was angry and wanted to retaliate against Zach Collins. However, the leader kept calm and got back on the Spurs by winning the game for Westbrook. Even though Russell took a lethal injury in the head, the fans are happy to see the players got each other’s back. Recently, all the players have been under the rumor of trade. And such incidents strengthen the bond between them.

A similar incident occurred when the Lakers played against the texas side Phoenix Suns. Patrick Beverley pushed Deandre Ayton in that match because he was trying to stand on a Laker when he was down. Even the head coach, Darvin Ham, said publicly, “it is what it is”. Ham believes the teammate must have each other’s back on the court. It would not have looked good if Ayton would have stood on Reeves and no one had come to his rescue.

Meanwhile, LeBron James marked his return to the game with a huge scoring for his team on Saturday. The performance on the night is proof that he has a lot of games left in him. It looks like both the superstars of the Lakers flourish when one of them is missing the rotation. Even at 37, King James keeps on shocking fans and doubters with his athleticism. The game on Saturday sent a huge subliminal message that the Hollywood side is not yet done in the league after all.