Lewis Hamilton, the seven-time Formula One world champion, passed a winless season this year. The second home, Brazil, also could not bring luck to Hamilton as it was written in favor of his teammate George Russell.
By Uzma FatimaDecember 12, 2022Updated:December 12, 20223 Mins Read
Facebook Twitter Pinterest LinkedIn Tumblr Email 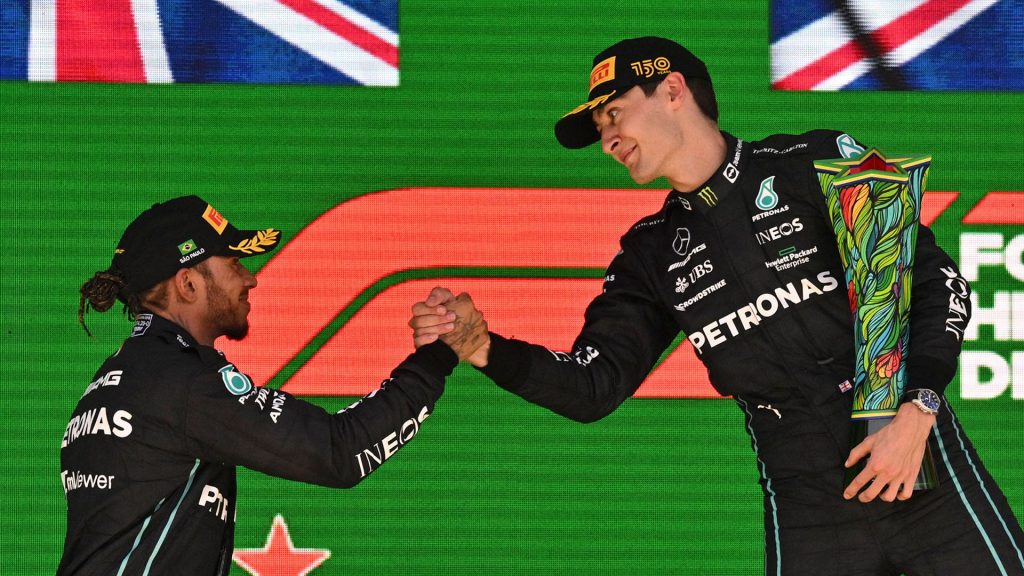 The 24-years old Mercedes driver George Russell won his maiden race in the Sao Paulo Grand Prix. He claimed the race with Lewis Hamilton’s only hope of securing his first win, yet there was no smell of jealousy from the seven-time world champion.

When George Russell won his first race in Formula One, he was not the only one who got emotional. Lewis Hamilton was also smiling for him while standing behind him. Despite surviving the worst year of Hamilton’s career, he is happy that his team did not give up, which is a win in a way for him. For George Russell, who kept Mercedes pride to round off the season with at least one win, Hamilton shared his emotional feelings with Channel 4. “Just seeing everyone happy celebrating together” made him passionate about his team.

After passing the streak-breaker season, Lewis Hamilton said, “In a video, I saw my team when we go to Abu Dhabi. And just seeing them celebrating all together was quite an emotional thing. Because I know how hard everyone had worked through the season.” The Briton believed that the year had been very difficult for the Silver Arrows. It was more difficult for him to accept that the team was not rewarded for their hard work last winter.

An entire season without giving up with continuous faith for better performance, keeping high hopes. And eventually, getting a one-two victory in Brazil was more than enough for Mercedes to feel proud. According to Hamilton, Interlagos was the result that team Mercedes and George Russell deserved for their hard work.

With George Russell’s first victory in 2022, Mercedes managed to merge all the happiness together. Noe, expectations for Russell have been raised even higher in the team. The 24-year-old ex-Williams driver proved himself that with a perfect car, he could become unreachable on the track from the beginning till the end, as he did in Brazil.

When George Russell drove for Williams for three years, he might not have won any races. But the young Briton did make a name for being “the most consistent driver,”. And this is what tempted Mercedes to provide a seat to George near the seven-time world champion finally.

Meanwhile, Mercedes strategy chief James Vowles could not resist applauding the newcomer for his “best” performance in the “worst” season of Mercedes. Vowles says, “Irrespective of the qualifying laps, George Russell had a very very strong pace throughout the year. And this is exactly what Mercedes is looking for.”

Calculating the facts that how the 24-year-old newcomer fit into the environment of the champion team, working with Lewis Hamilton really feels incredible. George Russell did an excellent job! Switching from Williams to THE MERCEDES is not an easy task, but Russell becomes a master in doing that, claimed Mercedes’ strategy head.